Why It Makes Sense for Publishers to Bundle Services, Like NYT and Scribd

The latest package deal for new readers is $12.99 per month 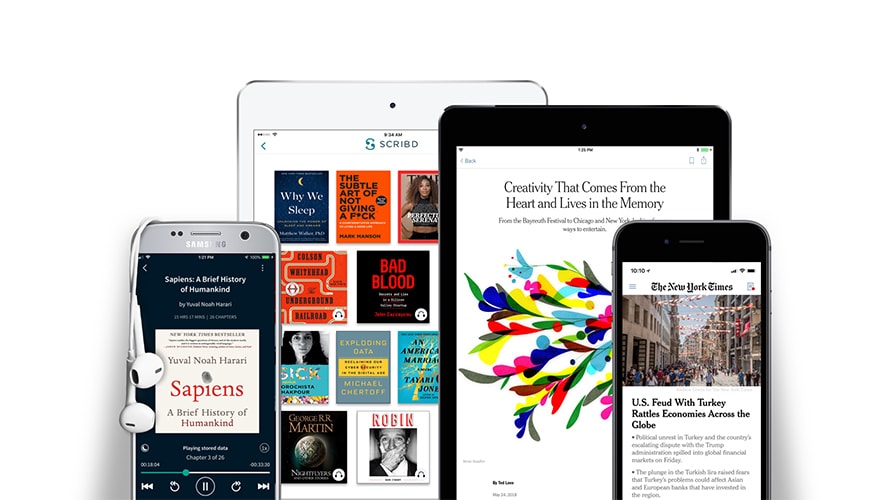 Consumers are growing more accustomed to paying a monthly fee for their content. As they sign up to see, read and watch more and more of it, publishers are becoming more likely to partner with other companies to offer bundled services to grow their audiences and establish new revenue streams, media experts told Adweek.

Most recently, The New York Times and Scribd, a company that offers unlimited access to books and audiobooks, announced they would offer a package deal to new readers at $12.99 per month that includes access to Scribd’s library and a basic digital access to NYT.

Media companies are using a playbook from Silicon Valley, Gallagher said. “Instead of acquiring the competition, they’re partnering with them,” she added.

Companies have frequently offered bundled services, with special packages for students, including Spotify, which teamed up with Hulu and Showtime to offer a deeply discounted price for those three services at $4.99 per month to those still in school.

It can be an effective way to gauge interest in a particular offering, said Janet Levine, Managing Director, Invention+, Mindshare North America. And after students graduate, “they become loyal to whatever subscription they were using in college.”

Even The New York Times and Scribd have played around with this concept, offering a package deal for students, at $4.99 per month. That package deal’s success helped motivate them to put one together for new readers, they said.

The New York Times and Scribd did not say how many students signed up under their student package.

“It’s about reaching a new audience, about presenting all that the Times has to offer to an audience that may have just a narrow view of the Times,” said Russell Kern, managing director, marketing partnerships, The New York Times. “As the Times looks to become an even more prominent news organization, we hope working with Scribd will achieve that goal.”

The price of the new package is slightly more than Scribd’s usual $8.99 per month and less than NYT’s basic digital access package, which is $15 per month.

“People take it as a modern version of a good deal, and publishers and brands know that and people love to get things that they’re consuming at a discount,” Levine said. “And it’s a trend even as we see paywalls are being built and people are paying higher premiums to get access to the content that they love.”

Details of the NYT bundle with Scribd, including how long it will run and how much each earns from the deal, were not disclosed.

“It’s more money going back into the industry, for Scribd, for The New York Times, and we hope will grow the overall size of the industry,” said Trip Adler, CEO of Scribd.

Previously, media organizations might have held off on these types of partnerships out of fear of brand dilution, Gallagher said, but “the Times may not care anymore.”

“They want people reading them and looking at their ads,” she said.

For these bundled packages to work, the companies have to have similar audiences with services that offer complimentary content for people who might be looking for a deeper experience, Gallagher said. And one good thing about these partnerships is that they don’t seem desperate for the publishers or the companies they’re working with.