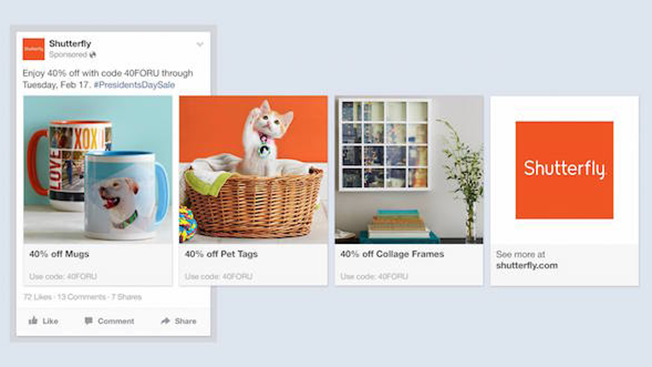 Anything Google can do Facebook wants to do better. And with the latter's new product ads, it has a data advantage that could lead to big revenue for the social network.

Yesterday, Facebook revealed that it's starting to serve ads for retailers' goods that use the targeting and personal-interest information it has on its 1.4 billion users. These product ads are an answer to a service that Google has offered businesses since 2013 with Shopping Ads (which were initially called Product Listing Ads). Google Shopping Ads show up as paid posts atop retailer-focused search results and render pictures and prices of items for sale. They are highly visual compared with text-based search results and have become a lucrative piece of Google's search business.

In fact, according to Q4 2014 research from Adobe Digital Index, 20 percent of clicks on Google search links for retailers were on Shopping Ads. Also, Adobe said that merchants spent 47 percent more on Google Shopping Ads year-over-year last quarter, meanwhile they decreased spending on text-based ads by 6 percent during the same period. The interest in the format, which entails more dynamic creative, shows how digital advertisers prefer more visual marketing over simple text.

Now, Facebook has the opportunity to mimic that success with its troves of consumer data while siphoning from its rival's digital dollars. Its product ads will let businesses zero in on users based on elements such as clothing preferences, musical tastes and location.

"Facebook has the best targeting capabilities, so it can take some of the limelight from shopping ads on Google," said Tamara Gaffney, principal analyst for Adobe Digital Index (ADI).

Facebook has made dynamic visuals a priority—not just with its new product ads—but with the whole design of the platform, encouraging more video and photos. And there's a bottom-line reason behind such moves. Gaffney and her ADI team's quarterly research last month read: "Advertisers are gravitating toward creating an image-based Web shopping experience for consumers."

Facebook is also attracting more retailers, which means there will be a likely increase in demand for more effective shopping ads.

In a twist on more brand posts reaching fewer people, according to Adobe, these companies still saw 14 percent more likes, comments and shares, which demonstrated that users found the posts more relevant. Part of the reason was because of more videos and photos.

With all the retail activity on the social network, CEO Mark Zuckerberg and his team want to see growth in shopping ad spend, just like Google saw—up 47 percent in 2014. "Shopping Ads are major revenue growth drivers for Google," concluded the aforementioned ADI study, which is dubbed the Global Digital Advertising Report.

By the second half of 2015, Adobe predicted that shopping ads will account for 30 percent of all search dollars. Also, Google and Facebook are not alone going for that market—Yahoo and Bing have a version; however, for now they control only a small market share.

"This adds a whole other level of complexity for marketers who now have to handle [multiple] channels and not just spend all their budget on Google," Gaffney remarked. "Even last quarter, we saw quite [a] big shift to Facebook."

Lastly, Target and Shutterfly are the only known test brands for Facebook's product ads so far.