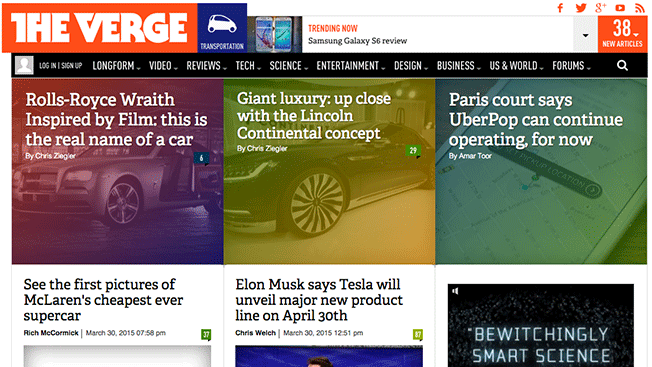 The next road taken for The Verge veers toward the auto industry. The Vox Media online publication unveiled Transportation, a section dedicated to all modes of travel, with launch partner Chrysler on Wednesday.

"In as much as every car on the market is going to have a connected car capability, that sort of in a way opens up the entire portfolio of the auto industry," said Chris Ziegler, The Verge's deputy managing editor who will head the new section.

It's not just going to be straight coverage of new technologies in vehicles, however. Ziegler said tech companies like rideshare service Uber and exciting developments in driverless technology have generated interest beyond the traditional car enthusiast.

"Just because you aren't buying cars doesn't mean you aren't interested in transportation in general," he pointed out.

It may be the right time for The Verge to be launching a transportation section, considering auto sales have been increasing in the U.S. The New York Times reported 1 million more cars sold in 2014 than the year before. And, with more companies offering ways to track digital marketing to actual auto sales, an increasing number of car manufacturers are willing to put advertising dollars online. Yahoo announced the launch of its latest digital magazine, Yahoo Autos, on Wednesday, sponsored by BMW.

However, NBC found during Super Bowl XLIX in February that the auto industry was one sector spending fewer advertising dollars than in past Super Bowls.

Vox Media vp of national sales and partnerships Mike Hadgis said it had no problem securing launch sponsor Chrysler. In fact, he said, one of the reasons the section came about is because of The Verge's successful track record with auto advertisers. Its original launch partner in 2011 was BMW, and it's also forged partnerships with Ford, Lexus and Infiniti.

"[Auto manufacturers] see a value in a very knowledgeable technology-driven audience," Hadgis explained. "We already have the great coverage of The Verge, but we can add a valuable layer of more endemic content with auto coverage to hit both their main targets of a technology-savvy audience and consumers looking to buy soon."

"Technology is a focal point we prioritized," Peet said. "The Verge's editorial voice is a strategic fit, and its new transportation hub presented an opportunity for the Chrysler brand to not only extend our audience reach with this target, but also align the brand with content that is fast becoming an increasingly important aspect of our daily lives."