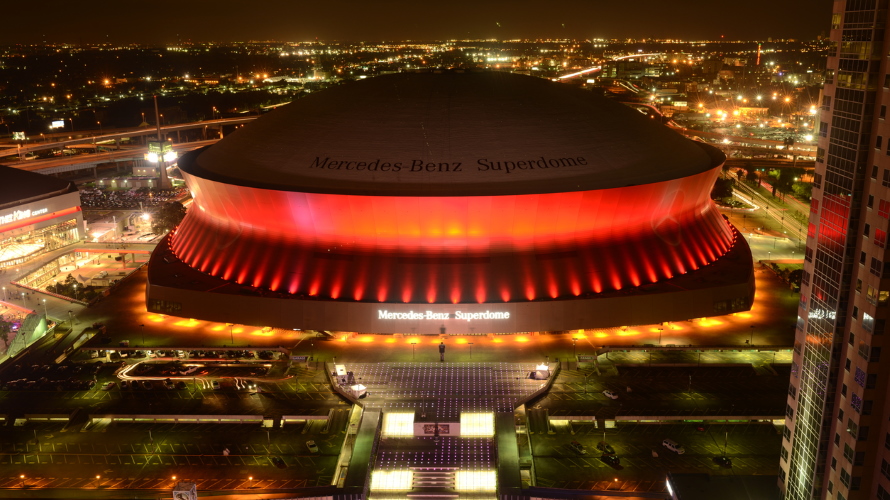 All eyes will be on the Mercedes-Benz Superdome in New Orleans Monday night
SeanXu/iStock
Share
By David Cohen
|
January 13, 2020
Share

Clemson University and Louisiana State University will battle it out in the college football National Championship Game at the Mercedes-Benz Superdome in New Orleans Monday night, and Twitter is bringing fans close to the action.

ESPN will livestream a one-hour pregame show from New Orleans on @ESPN at 7 p.m. ET, featuring talent including Jasono Fitz, Harry Douglas, Treavor Scales and Gary Striewski, both inside the stadium and outside in the fan area.

Pregame, in-game and postgame highlights will be shared on @ESPN, @SportsCenter and @ESPNCFB.

During the game, fans who include the hashtag #CFPTwitterCam in their tweets will receive direct responses with photos from the multiple camera angles being used during the broadcast.

Twitter said there have been over 1.9 million tweets about the LSU Tigers since Sept. 1, from almost 450,000 users, and video views on @LSUfootball from September through December tallied some 48 million, with about 265 million impressions.

The five most-tweeted LSU hashtags are:

And the days with the most tweets about the LSU Tigers were:

As for the Clemson Tigers, there have been more than 690,000 tweets about the team from nearly 250,000 Twitter users since Sept. 1, and video views on @ClemsonFB from September through December, reached 11.6 million, with roughly 82 million impressions.

The five most-tweeted Clemson hashtags are:

The days with the most tweets about the Clemson Tigers were:

Twitter also shared some data on LSU quarterback Joe Burrow, winner of the 2019 Heisman Trophy, saying that he started the season with 38,000 followers, climbed to over 90,000 after LSU beat Alabama and now sits at over 157,000 followers.

Burrow’s five most-retweeted tweets from this season were:

A tribute to this great state and university. Death Valley, where opponents dreams come to die... but where mine came true https://t.co/lGLyAkBLAG

That’s Ight I’ll take the 4 tds and the dub https://t.co/VVDLdQbqNW

Our team is worth 1.5 BILLION dollars but it wouldn't be fair to other students if we get a free hamburger https://t.co/SKHPmhzeRq

Louisiana I love you

Finally, Twitter will open the doors to its #TweetSuite at the Superdome Monday night, inviting college football insiders, influencers and select superfans to join them in its suite.