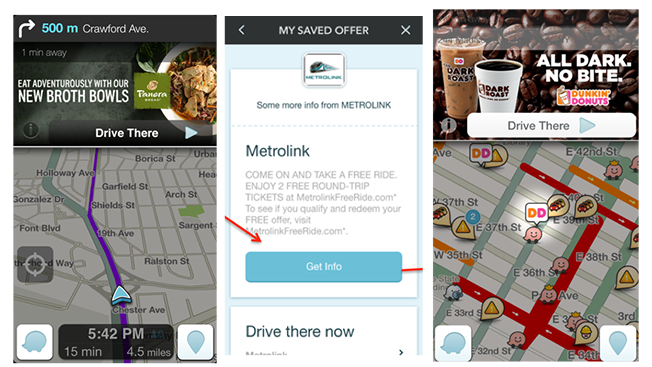 Nearly two years after Google acquired Waze for more than $1 billion, new research and prolonged advertising deals from brands show that the mapping app is making a dent in the lucrative—and competitive—market of location-based mobile advertising.

Waze has kept a relatively low profile since being acquired by the Mountain View, Calif.-based company, building up an ad business with a core group of retail, fast-food, gas and transportation brands. Equipped with data and a solid following of daily users who consistently use the app to navigate traffic, Google is battling Facebook, independent ad networks and Foursquare for a piece of what BIA/Kelsey forecasts will be a $15.5 billion market by 2018, up from $4.5 billion in 2014.

New research released this week shows how the app's promos affect ad recall and navigation rate, or the number of people who drove to a location after clicking on an ad.

The mobile player offers advertisers two formats—branded pins and takeover ads. Branded pins show drivers how far away they are from stores. And takeovers are interstitial ads designed not to distract drivers. They pop up when a user is idle for three or more seconds and disappear when the car starts moving.

Per Waze, ad recall increased 86 percent for drivers who saw branded pins compared to those who didn't. And takeover ads boosted ad recall by 155 percent when compared to a group of drivers that was not served ads.

To measure navigational lift, Waze compared how people searched and clicked for directions after seeing a brand's ad, with a control group that did not see ads. On average, navigational lift increased 53 percent after either a pin or takeover ad.

According to Jordan Grossman, head of U.S. sales at Waze, the average Waze user spends more than five hours with the app each month. That high level of engagement has kept advertisers coming back. After working with brands on quarterly campaigns in 2014, 25 percent of Waze advertisers—including Dunkin' Donuts, Phillips 66, Chick-fil-A, Panera Bread, Outback Steakhouse and Metrolink—are running yearlong campaigns for 2015.

Waze crowdsources traffic data that brands can then use to target their promos by time, day and location. The app also has a partnership with Accuweather, pulling in real-time weather conditions like temperature, humidity and pollen count that brands can buy ads against.

"[Advertisers are] now drilling in on a tactical level and seeing there are a number of different layers that you can use to engage people within a mobile environment," Grossman said.

Take Dunkin' Donuts, for example. Back in 2012, the coffee chain was one of the first brands to map all of its locations with Waze. It then started buying ads and is now working with agency Hill Holliday on a yearlong program to test geo-targeted promos.

Dunkin's ads promote offers to Wazers who are in the process of driving to one of its locations or a competitor's. The ad creative changes on the fly to promote specific food and drink items at different times of the day. For example, an ad might push hot coffee in the morning and iced coffee in the afternoon.

"We know at that very given moment that the Wazer is navigating to go to get a cup of coffee or something to eat, and it allows Dunkin' to message them with promotional activities for a dark roast coffee or a chocolate croissant," said Dave Bolger, svp and group media director at Hill Holliday.

During the fourth-quarter of 2014, more than 80 percent of Dunkin's impressions were sent to folks within 10 kilometers of a Dunkin' store. Those who saw the ad were more than two times as likely to use the app to navigate to Dunkin' than those who did not see an ad, driving a total of 1,000 navigations to stores across multiple states. Granted, the ads are big and hard to miss, but the number is interesting given that the East Coast-based brand is running the campaign nationwide in places such as California, where Dunkin' is still relatively new.

Based on those results, the coffee company is now looking at how it can layer weather data on top of time and location. "We can then reach consumers as they're in traffic to talk to them about Dunkin' in a much more relevant and meaningful way," said Nick Dunham, Dunkin's director of media.

Panera Bread is similarly working with Waze on its ongoing campaign to push out seasonal menu items, including some of its newer additions like broth bowls.

Panera declined to share the results of its ads, but vp of marketing Chris Hollander emphasized that his company's ads are intentionally simple to get drivers from point A to point B as quickly as possible. "We don't want to distract drivers or passengers with flashy deals or discounts," Hollander said. "Our singular goal is to suggest locations and provide directions to Waze users along their route."

On a smaller scale, Metrolink—a commuter rail system in southern California—reports that its ads that offer free tickets are generating a 0.39 percent click-through rate.

Metrolink's promos show up when someone searches or is driving. Once someone sees the ad, he or she can either click through for directions to a train station, or they can save the offer for later.

In January, Metrolink's ads served up more than 1.4 million impressions, driving more than 5,800 website clicks. More than 43 percent of people who saved the offer later opened it in the app.

"Eighty-nine percent of our riders have automobiles," noted Mark Waier, manager of sales and marketing at Metrolink. "Waze directly relates to the type of advertising we want."