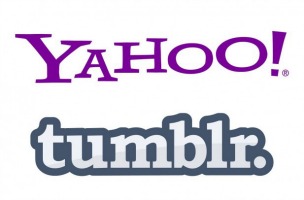 Only recently has the evidence of Tumblr’s new ownership by Yahoo become stronger, most notably in the launch of sponsored posts powered by Yahoo advertising.

Just like with Twitter and Facebook, now in Tumblr by typing the “@” symbol and the username of the account you want to address in a post, a drop down menu of names will appear. And just like on those other networks, a dashboard notification will be triggered for the person you mentioned.

The launch of @ mentions brings the network even more in line with other major social media platforms, and illustrates Yahoo’s influence in seeking to boost activity and engagement on Tumblr. It’s obviously in Yahoo’s best interest to boost Monthly Active User numbers and interaction metrics as much as possible; in addition, the ability to @ mention could be strongly appealing to that coveted younger demographic.

This week also saw the debut of Yahoo Web search into on the platform:

Now users can search either just Tumblr posts, or Yahoo.com. When you type in a search term and click “web,” the results still display in Tumblr’s good-looking new search display:

From there, you can toggle to display just Tumblr posts for your term, or the most recent or most popular web results.

What do you think about these new Yahoo-inspired Tumblr features? Better late than never, or harmful to Tumblr’s closely cultivated independent personality as a social network?