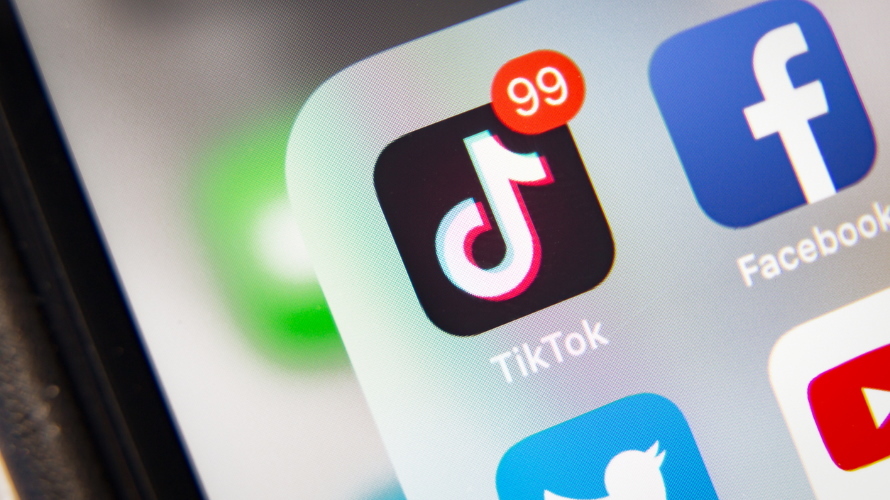 US General Manager of TikTok Vanessa Pappas released a TikTok today reiterating that the company was "not planning on going anywhere." Getty

Tensions flared between the White House and short-form video app TikTok Friday night when President Donald Trump told reporters aboard Air Force One that he intended to ban the app from the U.S. as soon as today.

Trump told reporters Friday he could invoke emergency economic powers, presumably those granted by the International Emergency Economic Powers Act, a broad 1977 law whereby presidents can regulate commerce citing extraordinary national threats. There are steps the administration could take to make TikTok’s business more difficult to operate. Trump’s Commerce Department could also prohibit U.S. contractors from working with ByteDance if it puts the company on its Entity List—a separate move that could force Google and Apple to drop TikTok from their respective app stores. However, it’s questionable whether the president’s authority here would include TikTok, as the statute excludes the authority to regulate “any postal, telegraphic, telephonic, or other personal communication.”
Some regulatory experts, Adweek reported earlier, say the president has no authority to unilaterally impose a full ban on TikTok, which is which is wildly popular among young people and is growing its marketing bonafides. Kurt Opsahl, general counsel at Electronic Frontier Foundation told Adweek that regulators such as the Committee of Foreign Investment in the United States, a government body with the power to block or uncouple corporate mergers, can force TikTok’s hand.
Michael Greenberger, professor at the University of Maryland Carey School of Law, also recently told Adweek CFIUS would need more than “suspicions” to take action against tthe app’s parent company, ByteDance. “If CFIUS [determines] that U.S. companies cannot enter into cooperative agreements of one kind or another with ByteDance or TikTok, that would be troublesome, but it’s not a full-fledged ban of the kind that we see in India,” Greenberger said, referencing India’s ban of the app last month amid escalating military tensions with China.
In response to Trump’s pronouncement, TikTok in a statement to Adweek postured itself as a company built for “entertainment and connection” that, as it has grown, hired 1,000 more U.S. employees and financially supports American creators on the app. Furthermore, data from U.S. users is stored in the U.S. “with strict controls on employee access,” TikTok spokesperson Laura Perez said.
TikTok has denied charges from various U.S. officials that its user data is shared with Beijing officials. ByteDance, is now headquartered in the Cayman Islands, not in China, where trade-related tensions with the U.S. have been rising.

“TikTok’s biggest investors come from the U.S.,” Perez said. “We are committed to protecting our users’ privacy and safety as we continue working to bring joy to families and meaningful careers to those who create on our platform.”
Vanessa Pappas, U.S. General Manager of TikTok, released a video from the app’s main account Saturday morning, touting the company’s 1,500-person workforce in the U.S. and its investments in U.S. creators.
“We’re not planning on going anywhere,” she said.


A message to the TikTok community. pic.twitter.com/UD3TR2HfEf

Trump’s comments, and TikTok’s response, comes amid mounting bipartisan pressure from Washington, including pressure coming from Congress, where multiple bills seek to prohibit TikTok from federal work phones. TikTok has also come under scrutiny from the Committee on Foreign Investment in the U.S., a panel under the auspices of the Treasury Department that has the power to block and reverse mergers or force corporate divestment if it finds sufficient national security threats.
It also comes amid rumors of a sale: by midday Friday, multiple reports suggested computing giant Microsoft may purchase TikTok. Trump said Friday he didn’t support the notion that TikTok would be sold off, and on Saturday afternoon negotiations with Microsoft were reportedly on hold. Update: By Sunday evening, Microsoft confirmed it was still pursuing a purchase of TikTok, and that discussions would wrap up by Sept. 15.
In what clearly is an effort to both to  grow its U.S. footprint and assuage U.S. lawmakers, TikTok recently made a number of high-profile hires in the United States, including naming Disney veteran Kevin Mayer, an American, as its CEO in May. Last week, Mayer tapped Sandie Hawkins, a former Adobe executive, to be TikTok’s new advertising chief in the United States. In April hired Hulu’s vp of brand marketing Nick Tran joined as head of marketing for North America. Meanwhile, Internet Association Chief Michael Beckerman is leading the company’s lobbying efforts in Washington.