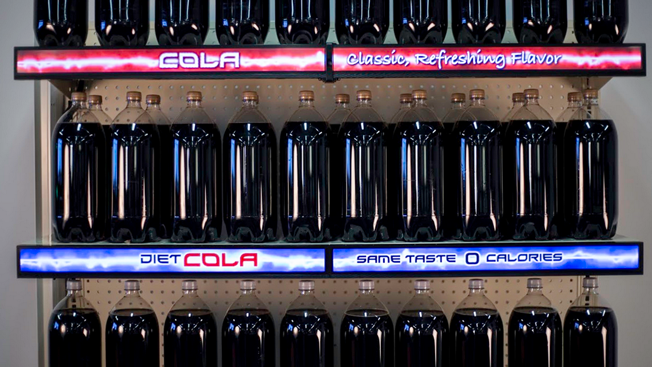 The next time you pick up a six-pack of Coca-Cola at your local grocery store, artificial intelligence may be analyzing your eye movements and facial expressions.

Today, tech vendor Cloverleaf is launching artificial intelligence-powered digital signs that slide over retailers' shelves to give marketers insights about who is standing in front of their store displays. Procter & Gamble has tested the technology—dubbed shelfPoint—and Dell is currently using it in a Micro Center store in Houston, Texas.

"We're able to gather insights about what shoppers are doing in front of the shelf itself, engage them and convert the sale to get them to throw one more item into the basket," explained Gordon Davidson, founder and CEO of Cloverleaf.

Here's how it works: The gadget is a 4-foot by 2-inch digital screen that wraps around retailers' shelves and displays digital ads that can be swapped out on the fly. Built-in optical sensors then detect anonymous information about shoppers. The technology can examine someone's facial expressions and let retailers see traffic patterns and consumer demographics. The shelves notably do not collect personal information; instead it runs in the background and looks for bits of basic information—like age, gender and ethnicity.

"There is no video or pictures captured," Davidson said. "Instead, it's using templates on a face that we match that then allows us to see if it's a female or male and the level of expression."

Based on the demographics and sentiment that the sensors pick up, marketers can then test different campaigns and swap out creative on the fly. For example, Coca-Cola could run images of bubbles on end caps to initially grab consumers' attention and then run different creative next to the products on the shelf to distinguish Coca-Cola from Diet Coke.

And later this year, Davidson said Cloverleaf will add technology that allows retailers to see if someone picked an item off a store shelf.

"[There's] a lot of technology thrown at retailers and brands and consumers walking through the store," Davidson said. "As a brand, one of the hardest things you have to overcome is getting people to notice a new promotion or a new product."