Brands were too afraid of the movie to take advantage of all the attention it's getting. 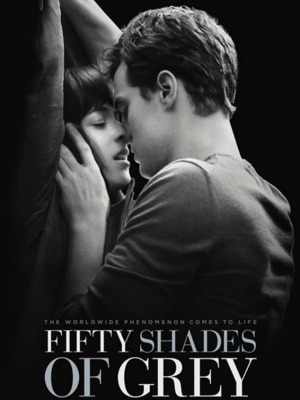 Say what you will about Fifty Shades of Grey — and there has certainly been a lot of ink spilled over this movie — it’s going to have a big opening weekend. Some predictions say the movie will pull in $60 million this weekend, including President’s Day. That would make it, at least for this weekend, a bonafide hit.

Many have been unkind in their reviews of the books and the film to be honest. Yes, there have been a few positives. But movie critics mostly harped on the fact that the movie has some dodgy dialogue, stilted sex, and the chemistry issues that we’ve mentioned previously have come back to the haunt the film and its stars. And then there’s this epic Aussie take down by Today host Jill Wilkinson, which also brings up some of the issues of domestic violence that some have been linked to the film’s central relationship.

We’ll take two minutes at this point to throw in our two cents because it’s Friday afternoon, we saw a screening the other day and why not: I’ve never read the books and went in with low expectations. I won’t say that the movie necessarily exceeded them; I spent a fair amount of time chuckling about the “action” onscreen alongside many in the audience. But it was much more slick than it should have been. I’ll give credit for that to Sam Taylor-Johnson, the respected artist who directed it, and to the two leads. They both had a good sense of timing, even making a few intentional jokes in the first section of the movie. I thought Jamie Dornan (Christian Grey) did a better job because he had less to work with; his dialogue was a mess mess mess.  Dakota Johnson (Anastasia Steele) relied a little too much on lip biting, premature writhing and panting to get her point across. When she had to talk at points, it seemed like she was reading from a cue card. But for the most part, I still don’t understand why 100 million copies of this book were sold.

But back to the PR.

At a time when moviegoers are confronted with full-on five-second shots of various products and brands on the silver screen, this movie was noticeably void of that. Merchandising surrounding the film has been robust to say the least. From nail polish to Teddy bears to baby onesies, there’s no category of item that doesn’t have a Fifty Shades tie in. But in the film, there’s a lack of product placement that so glaring as to make a marketer scratch their head.

If we had to guess, the content of the movie scared away a lot of brands. That’s fair enough. But there are some items that really could have benefited from the eyeballs the movie is going to get without being touched by the criticism. (And if any of the following items were part of a product placement deal, it was a fail because I totally missed it.)

-A car brand. Christian Grey is a billionaire with a garage literally full of cars. Itty bitty spoiler: He even gives Anastasia one. But no car brand stepped up to have their logo flash across the screen even once.

-A piano maker. In one of the stills from the movie that has circulated widely online, Christian is sitting at a piano while Anastasia saunters across the room wearing bed linens. Another itty bitty spoiler: He does that a couple of times in the movie. This would’ve been a good chance for Steinway & Sons (or another company) to get in a bit of PR.

-A mobile company. A good amount of their relationship happens via mobile device. There’s no reason why a mobile brand could’ve been the provider of this communication. If anything, showing that the brand can be a reliable part of all parts of a person’s life — even a very private one — isn’t a bad message.

-An airline and/or private jet company. Final itty bitty spoiler: Christian has a habit of popping up out of nowhere, even showing up out-of-state when Anastasia visits her mom. There’s also a scene of her on a plane. Particularly for the private jet company, coming off as capable of getting someone from point A to point B on a moment’s notice safely is a positive message. Yes, it’s a little stalker-ish in the movie. But the message is clear: If you want to surprise your submissive when she’s visiting her mom, this is the jet for you.

If you’re seeing the movie this weekend — and don’t lie you know you are… someone has got to generate that $60 million box office tally — let us know if you think there are any other companies or industries that could’ve gotten a damage-free plug.