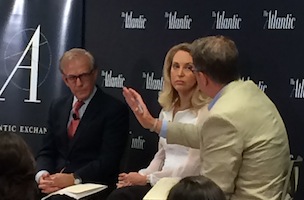 Last week we wrote about a conversation with WaPo columnist David Ignatius and outed former CIA officer Valerie Plame with Atlantic Washington Editor-at-Large Steve Clemons on US and international intelligence.

During the conversation, Ignatius was asked about James Risen, the NYTimes reporter who appealed to the Supreme Court to not have to identify a confidential source. Today, the United States Court of Appeals for the Fourth Circuit, in Richmond, Va. rejected his appeal.

“On the specific question of Jim Risen, absolutely, he should not be compelled to reveal his sources,” offered Ignatius.

The issue dates back to a May 2011 subpoena received by Risen to identify a source for his 2006 book State of War: The Secret History of the CIA and the Bush Administration.

Ignatius prefaced his support for Risen with question over the landscape of “journalist” privilege.

“I hope that the Supreme Court will respect his question of whether journalists have a special privilege. To resist subpoenas is a very complicated one. In a world where essentially everybody’s a journalist, everybody with a computer. How am I different from you really? Do we all have a privilege to pick and choose which grand jury subpoenas we’re gonna respect? We all have the right to publish now. So it’s really a tough one. It’s almost a box I don’t want to court to open. Because when you get inside that box, I fear that there will be a real statement…there is no privilege. You’re no different than anyone else.”