Also ramps up targeting in a big way 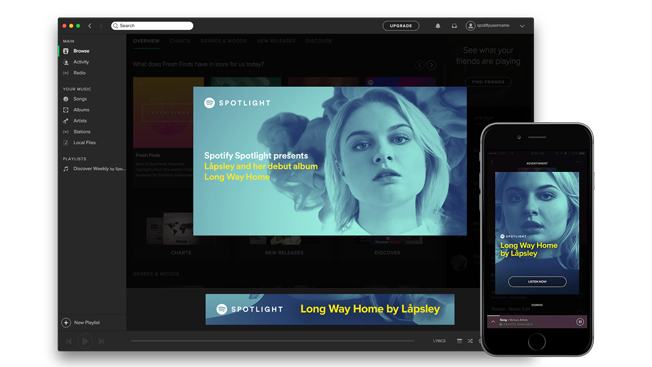 Spotify is introducing a mobile display ad format that it says will better catch the attention of its growing listener base.

Starting today, the music streaming service is bringing Billboard—one of its most popular desktop ad formats—to mobile. The feature, dubbed Overlay Mobile, lets advertisers buy display ads for both iOS and Android mobile devices. It serves as the "Welcome Back" ad, and only plays when a user has the screen open, which Spotify says provides 100 percent viewability.

The feature seems to follow where Spotify's audience is heading: to their phones and tablets. Of the company's 70 million users and 30 million subscribers, 65 percent of global streams are now on mobile devices. Average daily consumption is also on the rise, with users on average spending 148 minutes a day listening to music—a 28-minute increase compared with a year ago, said Jeff Levick, Spotify's chief revenue officer.

"There are very few mobile platforms that have this level of a highly engaged audience," Levick told Adweek. "And not just a high engagement, but an attractive audience of 18 to 34 year olds and actually reaching them at that real-time, interest-based level."

Spotify is also updating its suite of targeting capabilities. Working with data management platform Krux, Spotify is adding 100 interest-based audience segments. The partnership will allow Spotify to use its first-party data to target popular groups such as moviegoers, car buyers, luxury shoppers, sports fans, parents and fitness enthusiasts. Targeting will allow marketers to advertise to audiences during relevant parts of the day,

Levick said the playlists give Spotify a lot of metadata, which help indicate what listeners are doing at any given time.

"A playlist really is a representation of a moment," Levick said. "People listen to curated playlists around the use case of what they're doing."

Levick said Spotify's ad business has grown 100 percent year over year. Asked if the platform has increased ad load as a result, Levick said it hasn't, adding that the new features help to increase "ad relevance" through targeting.