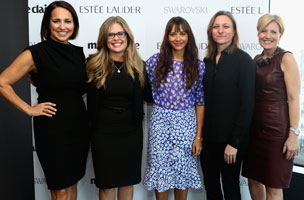 On Thursday, Marie Claire held its second annual New Guard luncheon at the Hearst Tower, honoring 50 “badass innovators, mogulistas and shot callers.” This year’s theme was “Flipping the Script,” a nod to female writers and producers breaking through Hollywood’s glass ceiling. The afternoon began with a keynote speech from Betsy Beers, executive producer of ABC’s #TGIT lineup (Grey’s Anatomy, Scandal and How to Get Away With Murder). Words so inspiring — and refreshingly blunt — that even one of the male wait staff in the room could be overheard saying, “Wow, just wow.”

Beers explained that she has worked with executive producer and head writer Shonda Rhimes since 2002, when the duo pitched a salacious hospital drama to a roomful of male network execs. After one of those men insisted viewers would never relate to the lead character, a female medical intern who could get drunk and have a one-night stand the night before her first day on the job, Beers proceeded to describe her own real-life experience doing just that. That show, Grey’s Anatomy, is now in its 11th season and a frequent contender on the awards circuit. These days, when asked how she and Rhimes manage to produce three different hit shows simultaneously, the first thought Beers has is no one ever asks that of Dick Wolf (producer of the Law & Order franchise).

Beers also reiterated the “no-assholes policy” Rhimes described in The Hollywood Reporter, but declined to name names. However, she did say, “Kerry Washington really is that nice.”

“I hope girls all over can count on our shows on Thursday to remind them that it is OK for them to be strong and complicated and they will find a reliable group of friends who will be there waiting for them,” concluded Beers.

The second half of the event consisted of a panel, featuring New Guard honorees: actress, writer and producer Rashida Jones; Jennifer Lee, co-writer of Disney’s Frozen, the highest-grossing animated film in history; and Cindy Holland, VP of original content for Netflix.

From Holland, whose next show for Netflix will star Jane Fonda and Lily Tomlin in a new twist on The Odd Couple: “Netflix knows women of all ages are watching television.”

From Lee, who says she was a single mom in Brooklyn when she started working on the script for Frozen: “I always have to focus on work, trying to be better.”

For the full list of New Guard honorees, pick up the November issue of Marie Claire.