Sex & The City 3 Could Be On the Way: 5 Tips to Modernize the Movie 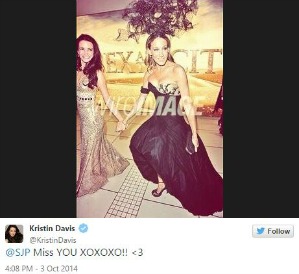 It’s baaaack! Well it could be. And actually, it never really went anywhere.

The fabulous four ladies of Sex & the City might be strutting their Manolos back onto the silver screen according to social media hints from two of the stars, Sarah Jessica Parker (Carrie) and Kristin Davis (Charlotte). Add to that word from Jennifer Hudson — who played Carrie’s assistant from St. Louis in the first film — that there are “talks” happening and you’ve got a serious rumor situation going.

Turn on the TV at just about any time of day and you can catch an old episode of the HBO show on any number of channels. The program made its mark for all the great fashions, the frank discussions of topics a lot of women are interested in, and a portrayal of life in the Big Apple that’s just as quirky, stressful and romantic as any ever portrayed.

But the show is also, in many ways, dated. One of the major criticisms of the show and, later the movies, are that they convey a vision of Manhattan that doesn’t take into account things like the recession.

So if the movie does come back for a third go-round, it’s going to need a big refresh in order to capture the pop culture zeitgeist the way it did back in the 90s and early 2000s. Here are some suggestions for how Sex & the City 3 can refresh the brand.

Do a better job of mixing high and low. It was always cool to see the ladies chowing down on a slice of pizza or a cupcake, but those “regular folk moments” were too few and far between. The fact is most people have cut down on the taxi rides, opting for the subway. Lots of people, fashionista or not, shop at the Gap, J. Crew and H&M. And the trend has moved away from fancy restaurants all the time and towards food trucks. So lighten up on the decadence.

Lay off the Brooklyn bashing. Brooklyn is so hot, there are businesses around the world branding themselves in the BK style (whatever that means). Williamsburg time and again is called one of the coolest neighborhoods in the country. So the old SATC business about how crazy it is to go across the bridge is passé. All the cool people spend at least some of their time in my hometown borough.

Get your tech savvy on. Being hip to computers, cell phones and social media is just another part of life now. Back in the early days, Carrie was clueless, so much so that she hired an assistant to manage her inbox. Now there are apps for that. Part of being modern women means having a good handle on a variety of tech tools.

Be a little more realistic about the dating scene. When we left off in the last movie, all of the ladies except for Samantha were married. So unless the new movie will involve a divorce, there will be a lot less dating than there was in years past. And even though power PR Samantha is a hot number, the dating scene simply isn’t what it used to be. You’re not going to meet hot available guys at every turn. An up-to-date portrayal will include the difficulties of meeting people, particularly as you get older and in light of online dating.

Really have some diversity. SATC hinted at diversity by bringing in Jennifer Hudson and Blair Underwood, who was Miranda’s hot boyfriend briefly. There have also been a few gay characters. But the media world that Carrie and Samantha inhabits is a more diverse place, and its diversity is growing. Life in general in the city is more diverse in so many ways. While it doesn’t need to be a focal point, acknowledging it in more obvious ways is a must.