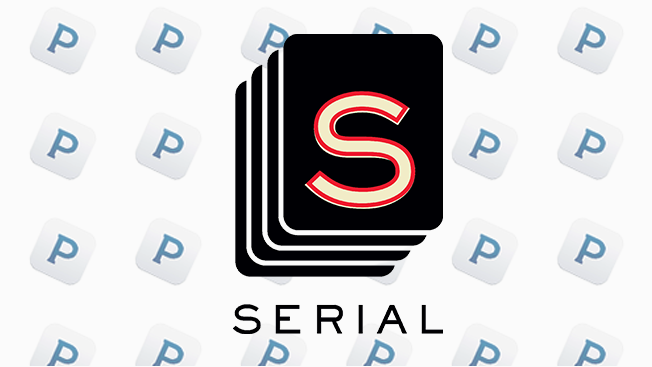 Buoyed by WBEZ Chicago's runaway hit Serial last year, music-streaming service Pandora wants in on the podcasting craze, and it's bringing in big brands to sponsor the content.

Two weeks ago, Pandora announced a deal to stream Serial. On Tuesday, listeners will be able to hear the first season of the podcast on Pandora's apps and site. When Season 2 premiers later this year—neither Serial nor Pandora have released an exact date—each episode will drop on Pandora at the same time it becomes available as a podcast download.

Warner Bros. will sponsor the Season 1 stream and the first half of Season 2, while Esurance will advertise during the second half of Season 2. At the beginning and end of each episode, the brands will get NPR-style audio ads, similar to the shout-outs other brands pay for in podcasts. In addition, a persistent display ad akin to a direct-response action will run throughout Pandora's stream. (Both seasons of Serial will still be available online and downloadable through iTunes and other podcasting apps.)

"The benefit is that we're streaming real-time, and the listener can clickthrough on the audio ad or the display ad," said Lizzie Widhelm, svp of ad product sales and strategy at Pandora. "In a [traditional] podcast environment, it's more branding-centric."

Warner Bros.' campaign promotes In the Heart of the Sea, the Ron Howard-directed film that tells the story of the 1820 sinking of the whaling ship Essex that inspired Moby Dick. The Pandora ad features a 15-second audio commercial voiced by Howard.

"Because Ron Howard is one of America's greatest storytellers and because Serial is all about traditional storytelling but in this unique format and platform, we thought it would be the perfect, organic marriage," said Blair Rich, evp of marketing at Warner Bros. Pictures. "[Podcasting is] almost like episodic television but in this classic, radio format with new technology." The strategy is to reach a larger audience, particularly people who have never listened to the series, by pushing the content to two platforms simultaneously. Since launching last year, the first season of Serial has amassed 100 million downloads. Pandora has 78 million monthly listeners.

While media companies like iHeartMedia and Slate have piggybacked on the podcasting trend by investing more money in content over the past year, advertisers cite scale and measurement as two challenges specific to podcasting.

"This was a really neat opportunity for us to expand into podcasting with a partner that we have a relationship with and have seen success with in the past," said Cyndie Beckwith, vp of marketing at Esurance. "The traditional podcast companies, unlike Pandora, lack deep measurement."

Esurance plans to run a study with Pandora to measure awareness after its campaign is over.

With all of the hype surrounding Season 1, some may wonder whether the second season of Serial will command the same audience. But Beckwith said she's not concerned about the possibility of a drop-off in listeners.

"None of us have a crystal ball, but Serial has been a very popular podcast and almost a cultural phenomenon, so we don't see any reason that it won't carry into Season 2," she said.

The Serial deal is the latest move on the part of Pandora into areas outside streaming radio. Early next year, the Oakland, Calif.-based company will also start streaming new episodes of the Ira Glass-hosted This American Life.

On Monday, Pandora acquired Rdio for $75 million, making its foray into on-demand listening, and in October, it bought Ticketfly for $450 million to create live events with musicians.

"We want to continue to expand the offering to bring new experiences and quality of content to our listeners," Pandora's Widhelm said.