Fear and Loathing on the El Chapo Trail 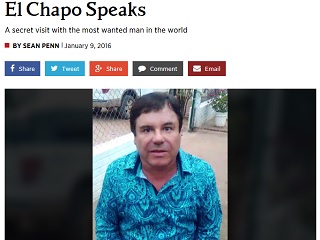 Sean Penn’s wildly improbable Rolling Stone adventure begins Monday Sept. 28 at a Midtown hotel, in the company of his “colleague and brother in arms” Espinoza. Or as the celebrity contributor describes his confidant in the second paragraph, with a wink to his movie catalog: “the owl who flies among the falcons.”

To fully appreciate Penn’s bombshell magazine article, posted Saturday night a day after the capture in Mexico of Joaquín Archivaldo Guzmán Loera, a.k.a. El Chapo, it’s best to view the prose as a first-draft sequel to the efforts of Bill Murray in 1980 and Johnny Depp in 1998 and 2011. This is a marquee actor taking his best shot at the gonzo trail of Hunter S. Thompson, and while it’s not always successful in that regard, it’s rock solid first-person phantasmagoria.

By Friday, Oct. 2, Penn and Espinoza, together with another trusted colleague El Alto Garcia and Mexican actress Kate del Castillo, are on their way via Los Angeles to the depths of rural Mexico, for a rendezvous with the fugitive drug lord:

We arrive at a dirt airfield. Security men in tailored suits stand beside two six-seat single-engine prop planes. It isn’t until boarding one of the two planes that I realize that our driver had been the 29-year-old son of El Chapo, Alfredo Guzmán. He boards beside me, designated among our personal escorts to see his father. He’s handsome, lean and smartly dressed, with a wristwatch that might be of more value than the money housed by the central banks of most nation-states. He’s got one hell of a wristwatch…

The flight had been just bumpy enough that each of us had taken a few swigs off a bottle of Honor tequila, a new brand that Kate is marketing. I step from plane to earth, ever so slightly sobering my bearings, and move toward the beckoning waves of waiting drivers. I throw my satchel into the open back of one of the SUVs, and lumber over to the tree line to take a piss. Dick in hand, I do consider it among my body parts vulnerable to the knives of irrational narco types, and take a fond last look, before tucking it back into my pants.

Penn’s clandestine caper, rustled in the fall of 2015 and writ in the winter of 2016, is jaw-dropping. Think also Narcos come to life, complete with the actor asking El Chapo at one point during their conversation if the Mexican cartel leader ever met Colombian counterpart Pablo Escobar.

Unless another Hollywood interloper finds time in 2016 to mingle with a world-class villain and put it to paper for a major magazine, this one is going to be hard to beat.