You really needed a bottle of wine (and maybe a couple of tequila shots) to get through last night's episode. 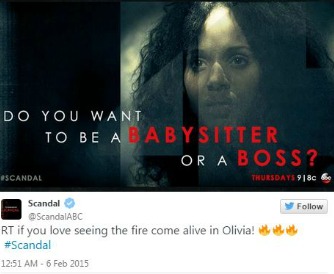 The Secret Service, military guards, butlers and just about everyone else in the White House is watching  everything Fitz does, down to the very toilet flush. On this week’s episode of Scandal, we find out that Fitz isn’t the most powerful man in the world. That title might go to the Vice President, Andrew Morris. But the most powerful person in the world might turn out to be Olivia Pope.

“It would be a shame if Ms. Pope was beheaded,” a Secret Service agent tells Fitz, a succinct summary of the game the Veep is playing. All of this is tied to the situation in West Angola.

Remember, when we left off before the mid-season break, the Vice President wanted to start this war and staged an attack to facilitate that. Now he’s going directly to the man up top to make it happen. But before we can get to all that, we have to catch up with the rest of the cast, who were largely absent from last week’s premiere.

We start with First Lady Mellie who is up to her old Mellie self, admitting to the President that she’s sleeping with Andrew Morris.

“I thought being with him would make me happy the way Olivia makes you happy… But now I think this is better. What we have is a partnership…” and blah blah blah she goes on until Fitz physically places two fingers on her lips to shut her up.

“Stop talking,” he says in what may have been his creepiest tone ever.

What Fitz wants is proof of life he gives in and starts Morris’ war, which is when we flash back to Liv, who’s sitting before a camera holding a newspaper, reading from cue cards.

At this point, I should interject that while I’m a Scandal fan, given all that’s happening in the world, this whole scenario is very fake and very real all at once, making it a little difficult to watch. When you know that real people are facing real terror out there in the world, it makes this plot line seem a little wrong. But we’ll press on.

So next we catch up with Huck, who has turned up in Lizzy Bear’s house, in her daughter’s room. And we all know that his devotion to Liv has few boundaries, so he’s vowed to cut open Liz’s child in front of her if she doesn’t give up some info. Thank goodness everyone watches this show with a bottle of wine.

It turns out that Lizzy actually didn’t know that this was where Andrew Morris was taking his plan, but it seems at first she’s going to go along with this and find a way to get Huck off her back.

You know who does know about this scheme? Tom, the Secret Service agent who’s in prison for killing Fitz and Mellie’s son. (!) And he’s asking for a presidential pardon (!) but Fitz wants info. Tom suggests he go to the only place where he can speak privately.

So when we get to Liv’s apartment, Jake is there. Fitz hands him the flash drive with the proof of life video that Liv made and he takes it back to Olivia Pope & Associates (OPA) to review with Huck and Quinn. During the filming of that video, Liv asks for a glass of water and takes a deep gulp from it while she’s reading the message. Twitter lit up as people tried to figure out what that could mean. Then Huck sees the reflection of Liv’s captors in the bottom of the glass. “She’s dropping breadcrumbs,” says Huck. Pretty slick.