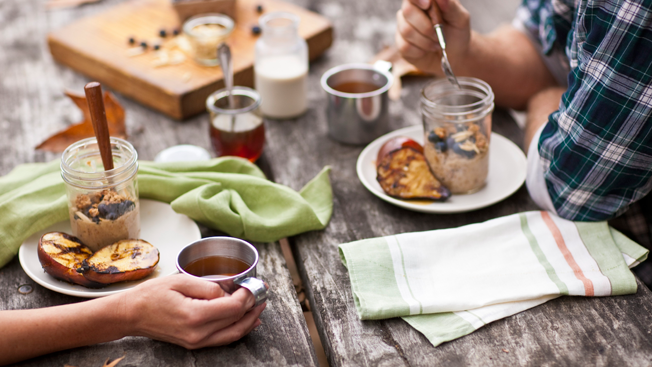 Quaker has a new robot chef and her name is Alexa.

The 135-year-old maker of oats is harnessing the power of artificial intelligence to help consumers make an oatmeal method as old as Quaker itself: overnight oats. Working with agency partner Organic, Quaker has built its first ever app for Amazon's virtual assistant, which is available through products like the Echo speaker.

The app, which debuted on Sunday at South by Southwest in Austin, Texas, helps users find and make recipes for overnight oats, a trend that came as a bit of a surprise to the household brand that arguably knows oatmeal better than anyone.

The idea for the app began a few months ago, after Quaker's social media team noticed there was a resurgence of an age-old tradition of cooking oats the night before and then letting them cool in the refrigerator overnight to be eaten cold the next morning. In fact, according to Quaker's director of digital marketing and social media Elena Parlatore, the word "overnight" was the most common word associated with "oats" on Pinterest, as food bloggers and stylists were posting visually appealing images of oats and fruit layered in mason jars.

"We were super excited and surprised," she said. "It was something they did in the 1800s when they didn't have stoves or microwaves, but it's back on-trend now because it's very visual and artistic, so we're seeing lots of young people basically make it their way, customize it."

Amazon Echo has gained traction and popularity over the past few months. Alexa now has more than 100 "skills"—or apps—and brands have begun working on integrations. For example, late last week Capital One launched a skill for Alexa that allows her to help users with online banking tasks such as checking a balance, making a payment or reviewing transactions.

David Shulman, CEO of Organic, said it should always be about "brand and demand," rather than trying to develop tech only for the sake of developing tech. He said the agency has been experimenting with Alexa for a while, but the Quaker app is the first full product that it's developed for Alexa.

"For me, the exciting thing is taking a 135-year-old brand that's so established, so powerful and historically so important, and matching it with the very latest technology, the intersection of the old and the new," Shulman said. "And I look at brands like Uber and others that are experimenting with the Echo platform and Alexa, it makes a lot of sense for them. But when you think about a really meaningful interaction for a brand like Quaker, with the newest technology, to me that's what Southby is all about."

According to Parlatore, Quaker is planning a launch campaign for this summer to promote the Echo app when it's available to the public. She said the campaign will likely include working with various influencers in the food world who might be interested in using the app to make various recipes.