Chicago Tribune and Miami Herald among this year's giddy winners

What could possibly knock down, to below the front-page fold of the Chicago Tribune, Monday’s Wrigley Field home opener celebration of the first Cubs World Series triumph in 108 years? A journalism prize marking its 101st year.

From the paper’s story about E. Jason Wambgans, a staff photographer with the Tribune since 2002, and his win for Feature Photography:

Wambsgans’ prize-winning photos appeared in connection with an in-depth report by Mary Schmich, herself a previous Pulitzer winner. In a year where Chicago homicides reached a 20-year high, the Tribune set out to document the toll of violence on children. That eventually led Schmich and Wambsgans to Tavon Tanner.

One of the most striking photos in the series, of Tavon pulling up his shirt to show his scarring, was taken about 10 minutes after he met Wambsgans. The two bonded immediately and shared an interest in photography, as Tavon had done a summer photography project. Wambsgans shot two frames, then stopped. He knew he had his picture.

Meanwhile, the Miami Herald has an even bigger reason to front-page celebrate today: two Pulitzer wins, for Editorial Cartooning and Explanatory Reporting. In the case of cartoonist Jim Morin, it is his second Pulitzer win, following previous recognition in 1996. 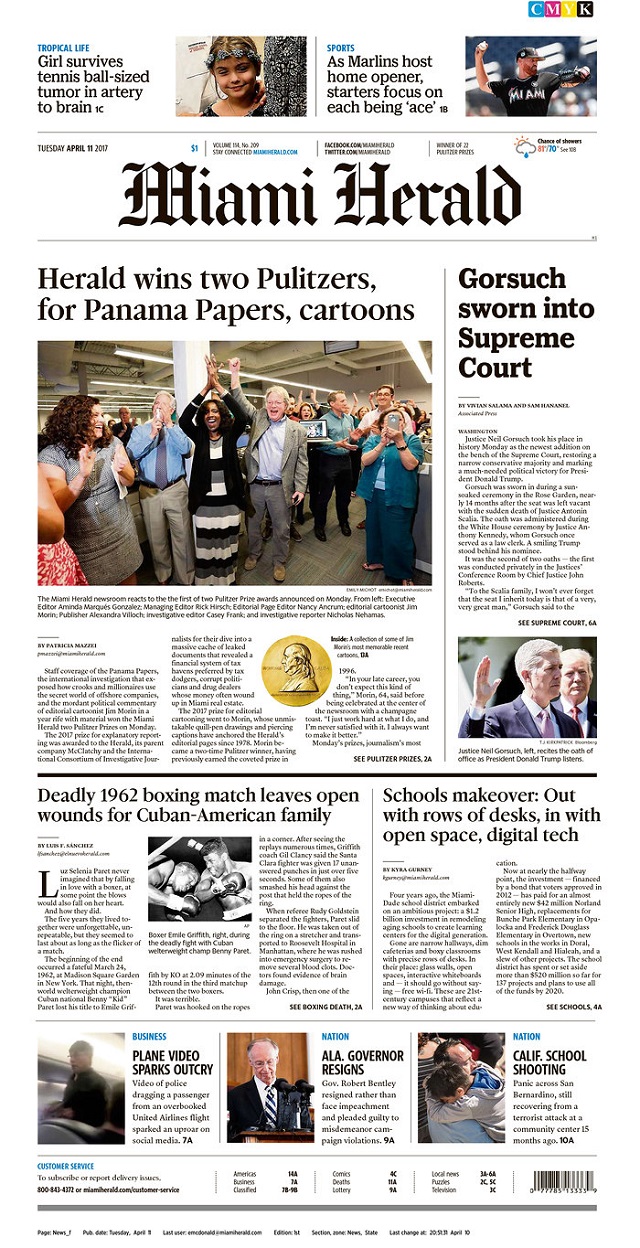 From the Herald report:

“In your late career, you don’t expect this kind of thing,” Morin, 64, said before being celebrated at the center of the newsroom with a champagne toast. “I just work hard at what I do, and I’m never satisfied with it. I always want to make it better.” …

Morin, whose cartoons are syndicated, honed his incisive political instinct growing up in the tumultuous 1960s. He started cartooning for the Daily Orange at Syracuse University, where he graduated with a degree in illustration and a minor in painting. He still paints oils; for several years at the Herald, he did painstaking, frame-by-frame animations of some of his editorial cartoons. Morin has racked up awards and authored six books, including, most recently, Jim Morin’s World, a 40-year cartoon retrospective.