How Police Are Using the Internet to Protect and Serve

A lost-and-found on Pinterest has helped police reunite stolen items with their rightful owners. 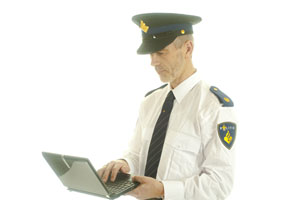 Policing and online activity don’t always go hand in hand. Stories of alleged police overreaction go viral. Sometimes police software is paired with social media to predict crime. And occasionally, users take the law into their own hands after some detective work. But a kinder, gentler policing solution has been found in Redwood City, Calif.: Pinterest is now the police lost-and-found.

After discovering a haul of stolen jewelry in the trunk of a car, detective Dave Stahler posted a collection of images to Pinterest. Included in the collection was a charm bracelet, which was stolen in 1983. Thanks to Pinteresters, it was reunited with its owner. According to Redwood City Police Department, this is the fourth such item successfully reunited with its owner since the department began posting lost-and-found pictures to social networks.

According to NPR’s All Tech Considered, this approach is becoming increasingly popular. “A quick search on Pinterest shows about 85 boards from police departments around the country — including Kansas City, Mo., police — who have used Pinterest to help solve burglary and robbery cases, locate missing people and educate parents about street drugs their kids may be using,” writes contributor Lorraine Sanders.

The digital lost-and-found is one more example of the police working to adapt to new kinds of crimes, such as the rash of Craigslist crimes. The East Chicago Police Department has even opened its parking lot and lobby to online traders in an attempt to deter theft or fraud during Craigslist transactions.

That’s one way to go. But apps like Find My iPhone enable users to cut out the middle man and pursue thieves on their own. “Although pursuing a thief can occasionally end in triumph, it can also lead to violence, particularly because some people arm themselves — hammers are popular — while hunting for their stolen phones” according to Ian Lovett of The New York Times.

Of course, it’s a bad idea to take the law into your own hands, especially over something as trivial as an iPhone. Best to report the theft to the professionals.