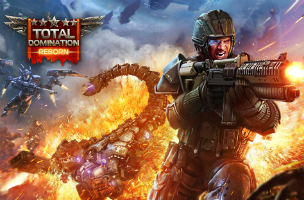 After a successful release on iOS devices, Plarium has announced the release of Total Domination: Reborn on Android. The base-building strategy game was first released on Facebook, and has been played by more than 30 million players around the world since launch. Total Domination: Reborn challenges players to build their base and recruit an army strong enough to take on other real-world players.

Players build their base by balancing the use of key resources, including titanium and uranium. Gamers then use these resources to recruit troops, or construct and/or upgrade buildings on their base.

Players are led through the game via a quest list, and while some quests are recommended for completion first, players can technically complete tasks and progress as they’d like (and as their resources allow).

Eventually, gamers will have an army capable of taking on enemy bases, whether they’re controlled by the computer, or by other players. When attacking a base, users can assign specific types and quantities of troops for the battle, depending on the units they’ve saved in their inventory. From there, the troops will walk to and attack the enemy’s base automatically, and will bring any acquired loot back with them over time.

Battles, building construction, troop recruitment and other tasks require time to complete, but players can speed up many of these tasks with premium currency. As players make progress, they can research new technologies, and then upgrade these to increase their base and army’s overall strength.

For additional social features, players can chat in real time with other players, or build an Embassy in their base to unlock alliance and clan features.

“Total Domination: Reborn has been designed with its own unique functionalities to offer the best mobile gameplay experience possible,” said Gabi Shalel, chief marketing officer at Plarium, in a statement. “Long term fans of the game series and new players alike will appreciate the completely re-imagined interface design, new artwork, and a streamlined set of features.”

Total Domination: Reborn is available to download for free on Google Play.