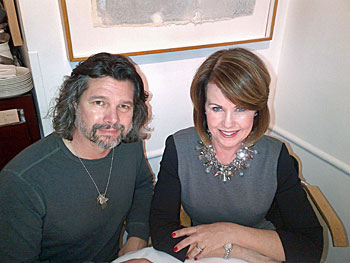 The city is chock-full of creative types and even more suits than usual this week, as many of the networks present their 2015-2016 slate of programming during the annual Upfronts. I was lucky enough to snag some time with Ron Moore, executive producer and writer of Outlander, who’s in town to talk up Starz’s breakout hit series. Produced by Sony Pictures Television, the show is based on Diana Gabaldon’s beloved best-selling (25 million copies and counting) eight book odyssey. The books spin an epic time-traveling tale of World War II nurse Claire (Caitriona Balfe) who is transported to 18th century Scotland and falls in love with Jamie (Sam Heughan). The cinematic series has plenty going for it: gorgeous castles, swashbuckling men in kilts and of course, plenty of bodice-ripping romance.

According to the network, when the series premiered last August, it set multi-platform records, averaging 5.1 million viewers, with some episodes pulling in as many as 6.2 million. Outlander’s freshman season was split in two parts (the first eight episodes aired last summer) and the midseason premiere, the first of eight new episodes, will air on April 4. Fans created the hashtag #Droughtlander for their social media threads, where they dissected and discussed the series during its absence. The show currently has 500,000 Facebook fans, with 100,000 on Twitter and 50,000 on Instagram.

“It was Starz’s decision,” said Ron of the split season. “It was always going to be 16 episodes split into two groups and they told me to think of what would make a strong midseason finale.” Mission accomplished. The first half of the season focused on Claire’s search for a way home and in the penultimate episode, despite having her husband, Frank (Tobias Menzies), back in 1945 trying to figure out what happened to her, she marries Jamie. The bliss is short-lived when Claire is abducted and attacked before Jamie rescues her. In Act Two, she’s now embraced her new life and battles new foes to fight alongside her new husband. According to the network’s press release: “Ruthless redcoats, volatile clan politics, and a brutal witch trial force Jamie and Claire to escape to a new home. Just when their life as a married couple begins to take shape, Jamie is once again drawn into Captain Randall’s darkness. Ultimately, Claire discovers there is a fate worse than death as she struggles to save Jamie’s heart, as well as his soul.” Proving, once again, that the first year of marriage is always the hardest.

Ron arrived fresh off doing an XM Sirius broadcast with the Outlander cast and is gearing up for the big premiere tonight at the Ziegfeld, where a few thousand fans (broken up into two screenings), along with assorted VIPs, will get to see the first new episode and attend a Q&A with the show’s stars. Having gotten his start in television writing for Star Trek: The Next Generation (more on that later) and later creating the reboot of Battlestar Galactica, Ron knows a thing or two about dealing with a franchise’s fervent fans. I asked him what it’s been like adapting material so revered by the books’ legions of fans in another medium. “It’s an interesting balance,” he told me between bites of Cobb salad. “This is my first time doing an adaptation. I’ve always appreciated fans going back to my days on Star Trek. Fans always come from a position of loving the show. [As a writer] you just don’t want to screw it up.”

Fat chance of that happening. A lifelong fan of sci-fi on television (as a youngster Ron bought The Making of Star Trek at an elementary school book fair and “was hooked”), he headed out to Los Angeles “to become a writer” and slept on the floor of a friend’s home in Studio City after flunking out of Cornell. He landed a job as part of the writing staff of Star Trek: The Next Generation, where he worked on 27 episodes, including the two-hour series finale All Good Things, for which he won a Hugo Award in 1994. That same year, Ron scored an Emmy nomination and was named a producer on the series. He went on to Star Trek: Deep Space Nine and when that series ended, he created Battlestar Galactica, for which he nabbed an Emmy nomination for Outstanding Writing for a Drama Series. In 2008, he won one for the Battlestar Galactica webisodes. He was also showrunner and executive producer for HBO’s Carnivale, where he met his wife, costume designer Terry Dresbach.