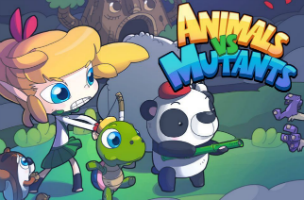 Netmarble US has announced the launch of its latest game on mobile devices: Animals vs. Mutants. The action battle game sees players attacking enemy bases in order to rescue friendly animals that have been captured by the nefarious Dr. Wicked. Players choose from two playable characters, and complete side-scrolling combat levels to rescue animals, which are turned into new units for the player’s army.

In each level of Animals vs Mutants, players are tasked with destroying Dr. Wicked’s base on the right side of the screen, while also defending their own base on the left side from enemy intruders. Both armies send troops towards the middle of the battlefield, and all combat takes place automatically. Players generate mana automatically over time, which can be used to recruit additional units, with each unit having a different particular skill. Troops like squirrels excel in uphill terrain locations, for example, while pandas roll downhill into enemies like bowling balls.

The player avatar also plays a role in combat, as users tap and hold to move left and right on the screen. Once the avatar is close enough to enemies, it attacks automatically. Players can also be attacked, so they’ll need to keep an eye on their health bar as they play.

Players unlock up to three stars on each level, depending on their speed in destroying the enemy base. Earning all three stars rewards players with premium currency, which is used to purchase premium items in the game’s store. This includes two additional unit slots for combat. Without them, players can only bring four individual animal types into battle. Since different animals have different skills and specialities, players are encouraged to swap out their teammates when levels call for a specific strategy.

Players also earn coins while they play. These can be used to purchase new mounts for the player avatar, as well as upgrades for each unit. These upgrades may increase a unit’s health points or attack stats, as examples. The player’s base can also be upgraded, increasing its defense points, increasing the rate of mana production while playing, and increasing the maximum amount of mana that can be stored at a single time, as examples. Users can also purchase upgrades that speed up the rate at which they can recruit the exact same animal, one after another, and increase the amount of gold or experience points players earn while playing. Experience points increase the player’s health points and attack power.

Elsewhere, players can purchase spells to use while playing. One spell may see players calling down arrows like rain onto the battlefield, for instance. Adding in more RPG-style elements, players will collect loot while playing, like new bows for the player character, new pieces of armor, hats and more. These items can be upgraded via a “random chance” system, which may see the enhancement fail or succeed, depending on the spin of a wheel.

Aside from the game’s 60 story missions, players can also compete in survival mode, battling wave after wave of increasingly challenging enemies. Battle mode also allows players to face off against friends (the game supports Facebook Connect). Another social feature allows players to recruit their friends into battle for extra help.

Rounding out the experience are achievements and in-game leaderboards. These achievements reward players with free coins for completing specific tasks, like purchasing items from the store, among other examples.

“Our mission is to develop and publish high quality mobile games that anyone can enjoy,” said Seungwon Lee, executive vice president of global at Netmarble Games Corp, in a company statement. “With bright, lush graphics, a deep RPG progression system and inviting battle gameplay designed exclusively for mobile devices, ANIMALS VS. MUTANTS is an excellent example of the kind of titles we look forward to introducing to new players in the global-market.”

Animals vs Mutants is available to download for free on the iTunes App Store and Google Play.