NABJ's 2015 Student Journalist of the Year never meant to take that course. 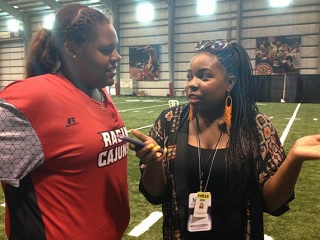 “Houston, we have a problem…” That’s essentially how it all began for Tierra Smith (pictured), the Grambling State University graduating student who today was named National Association of Black Journalists (NABJ) 2015 Student Journalist of the Year.

A native of Milwaukee, Smith became fascinated with the media when she was accidentally enrolled in a journalism course at her high school in Houston.

“If they never put me in that class, I would have never been exposed to journalism,” Smith said, in a piece written last year for The New York Times Student Journalism Institute. She was a 2014 participant in The Times program at Dillard University and she was a 2014 student journalist with the NABJ Student Multimedia Projects.

Her high school journalism teacher was going to remove her from the class because she did not have the necessary pre-requisites, but she saw her passion and decided to let her stay. A few months into the class, Smith was named an editor of the high school’s newspaper and yearbook.

Kudos to that high school teacher for bending the rules. And congrats to Smith, exiting EIC of newspaper The Gramblinite, for carrying on so successfully with this accidental vocation. Smith will intern this summer at the Denver Post as a Dow Jones News Fund business reporter, before beginning graduate studies at Louisiana State in the fall.

The NABJ also today announced that ProPublica’s Nikole Hannah-Jones has been selected as their 2015 Journalist of the Year. Both she and Smith will be presented with the awards at this summer’s NABJ annual convention in Minneapolis.