Smiths Fans Of The World Unite As Morrissey Finally Tweets 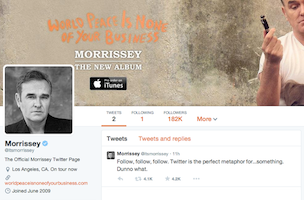 UPDATE (May 19th): The profile is bogus, says Morrissey himself.

While Morrissey joined Twitter way back in June 2009, it’s only now that he has started to tweet, likely to support the release of his new album, World Peace is None of Your Business.

Here’s what he’s had to say so far:

Currently, Morrissey only follows one other profile on Twitter – Universal Music’s Harvest Records, the studio producing the new album – and while more than 180,000 people have started following Morrissey, including such luminaries as Russell Brand, Ricky Gervais, Frankie Boyle and David Walliams, that tally doesn’t include former Smiths bandmate Johnny Marr. And probably never will.