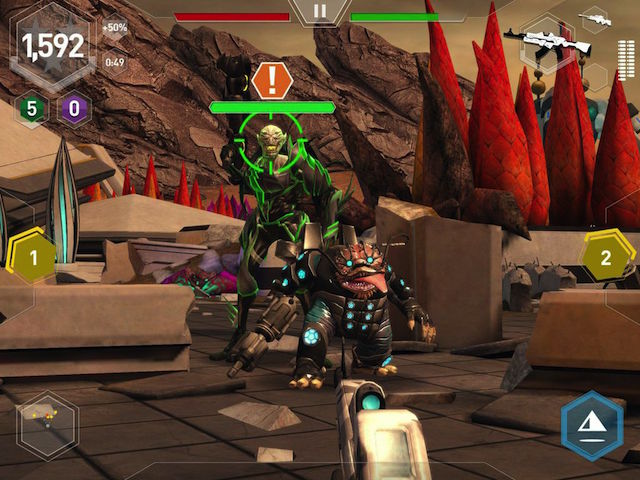 Midnight Star (Free on iOS) – Industrial Toys’ first mobile game, Midnight Star, is a sci-fi shooter set 120 years into the future. The game takes players aboard a research vessel as they investigate a mysterious signal coming from within our Solar System. When disaster strikes, players are challenged to fight off aliens in a war which will determine the fate of humanity. As an on-rails experience, the player’s character moves through the environment automatically, leaving players to tap or tap-and-hold on the screen to fire their weapon, or tap the side of the screen to change their viewing angle (among other options).Soul Seeker (Free on iOS, Android) – This action-RPG from Com2uS is now available to a worldwide audience, and challenges players to build a team of heroes and take them through battles against various boss characters. Players can collect up to 200 characters for their team, and can level them up while completing missions. Gameplay sees players navigating environments with a virtual joystick, while activating attacks and special skills with buttons in the lower right corner of the screen.The Hardest Flight (Free on iOS) – This newest game from Passion Project Studios and Chillingo challenges players to steer their ship through an endless supply of barriers, with the location of taps on the screen changing the ship’s color to match nearby barriers. Players hold on the right side of the screen to turn the ship pink, hold on the left side to turn it blue, or release both fingers for a purple ship. The ship moves upward automatically, but players must also tilt their device to guide the ship through the holes in each barricade.Pocket Shrek (Free on iOS) – This “companion simulation” game from No Yetis Allowed (in partnership with DreamWorks) gives players their own companion Shrek and Donkey, from the popular DreamWorks Animation film franchise, Shrek. Users can feed Shrek and Donkey when they’re hungry, make them sleep when they’re tired, tickle them to make them laugh and more. In addition, players can access the Magic Mirror mini-game to unscramble images of the franchise’s movie moments. As players complete activities, they’ll earn coins and can unlock new toys and additional mini-games for play.Dino Tales ($3.99 on iOS) – Aimed at players aged 4-11, Kuato Studios’ Dino Tales allows players to explore a prehistoric island while meeting six dinosaurs. The game’s educational feature set allows users to learn more about dinosaurs by crafting their own questions for their in-game helper, Darwin, to answer. Players can customize the look of their dinosaur friends with new skin patterns and paint colors, and while exploring, will discover new facts about the prehistoric world around them. Gamers can create a storybook documenting their adventures, and also play mini-games. Parents can customize the game’s features, limiting the length of time their child can play in a single session, and customizing the reading age to match their child’s reading level.Doraemon Gadget Rush (Free on iOS, Android) – This newest title from Animoca Brands is a line-drawing puzzle game, asking players to tap and drag their finger across matching-colored symbols to remove them from the screen. Players are given a limited amount of time to earn points in each game, with matches helping Doraemon attack robotic enemies. In between games, players can spend multiple types of currency on free helper gadgets, free characters from the Doraemon universe and more. These characters affect the gameplay in some way, and may provide bonus time on the clock, as one example.
Share
http://adweek.it/1xC9KxK