Cops believe the man shot himself 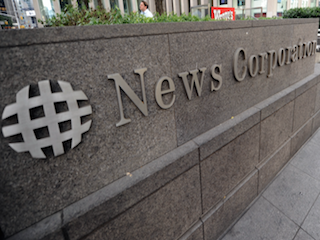 A man was shot in the chest outside of the News Corp’s midtown offices. Authorities told The New York Post that he was found just a little before 9 am.

The unidentified male had a gunshot wound in his chest and a small handgun next to him.

Cops believe that the man had shot himself. He was taken to Bellevue Hospital in critical condition.

Update (10:55 am):
The man was seen protesting Fox News prior to the shooting. Cops said News Corp security heard the man shouting that Fox News had ruined his life. He was asked to leave the premises. When security left to return to the building, a shot was heard. What appears to be a suicide note was located next to the man.

Update (2:08 pm):
The man has been identified as 41-year-old Phillip Perea. Perea was a former employee of a Fox affiliate in Austin, Texas. According to The Wall Street Journal, Perea worked for Fox 7-KTBC for 10 months, but had not worked there since June of last year. Perea was pronounced dead about an hour after arriving at Bellevue.