Ads will mimic action on the field 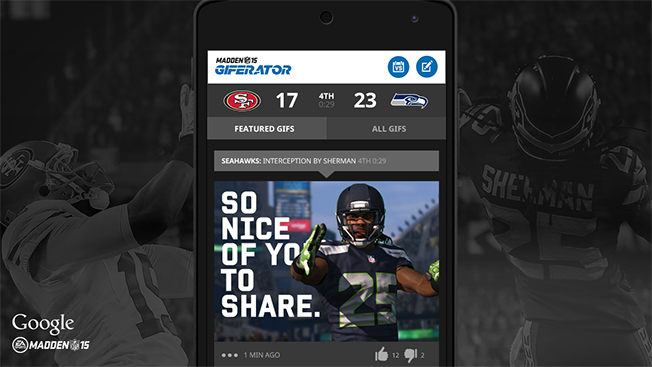 EA Sports: It's in the meme. To promote its flagship Madden football game, EA Sports is trying out a new Google advertising program that allows the game maker to quickly create gif ads and customize the message based on what is happening on the field.

The real-time marketing technology represents Google's answer to social media channels like Twitter, which seem to dominate the second-screen conversation when it comes to football and other live events. Now, Google is creating digital ads in the moment and serving them to fans browsing sports-related sites—not their Facebook feeds—at halftime. 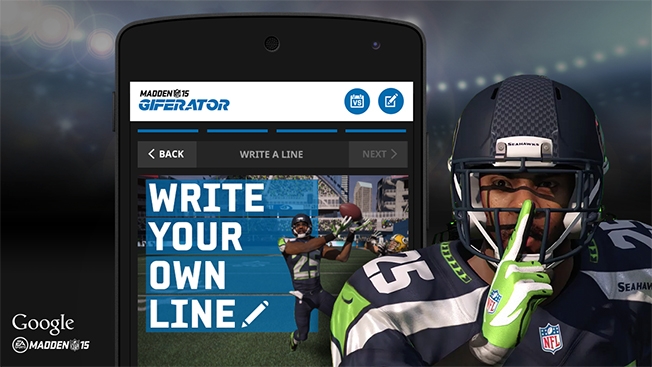 The Madden 15 ad campaign launch is tied to the start of the NFL season with the Seahawks and Packers playing tonight. The ads will be gifs—short, looping video clips—of game highlights with virtual Madden players re-creating the real-life action. The gifs will flash messages, kind of like trash talk—for instance, if Seahawk cornerback Richard Sherman scores after an interception, his digital doppelganger could do a TD dance and say,"Sorry, Cheeseheads."

EA hopes the ads spark sharing, and it created a website where people can customize their own gifs—it's called the Giferator.

Madden is in its 26th year and the franchise is among EA Sports' annual top-sellers. The game-maker spends "eight figures" on marketing yearly, according to Anthony Stevenson, vp of marketing at EA Sports.

Accumulating viewers was key to the Google display campaign that starts today. Partly by using data from people who viewed and shared the video, EA and Google are building special audience segments to target the gif ads. Google calls these "affinity segments," which can target not just football fans but specific team fans.

"We're piloting ad delivery technology that allows brands like EA Sports to be part of moment and after something happens on the field that brand can be out there on message with an ad," said Mike Glaser, marketing manager of creative projects at Google.

The Madden campaign was a creative collaboration among EA Sports, its agency Heat, Google and the agency Grow. Google said the effort falls under its Art, Copy and Code initiative, where it teams with brands and creative agencies to marry advertising and technology.

Google is showing off how its display ads can be created just as quickly as social media posts, which have become the typical real-time marketing medium for brands.

"We built a content engine, generating 100,000 ads depending on what happens in the game," Glaser said.

The ads are served across Google's Display Network, which connects to millions of publishers. Also, targeting means the Madden ads could show up in places like the sports-centric Bleacher Report. 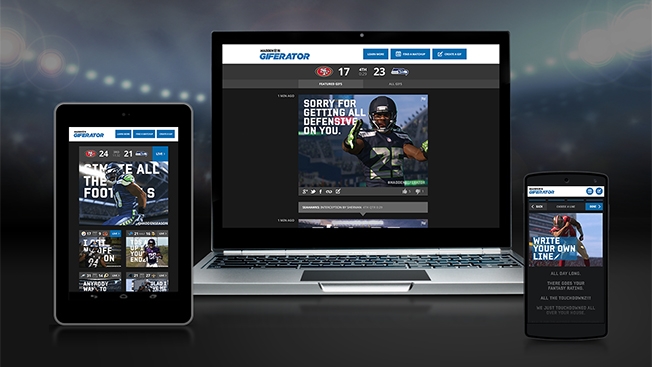