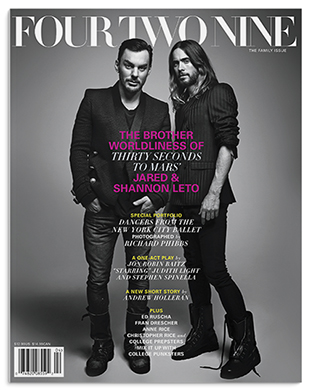 One great advantage of profiling a wordsmith like Kevin Sessums, formerly among Tina Brown’s marquee writers at Vanity Fair, is that he can be counted on to deliver marquee quotes.

Here for example is how he describes, to New York Times reporter Laura M. Holson, what he deems to be a signature Brown talent. Sampled after Sessums made an infamous remark about a Roseanne Barr Vanity Fair cover in the post-Brown era:

He recalled being seated at a booth at the Royalton Hotel soon after when Ms. Brown stopped by. “‘I heard what you said about that cover!'” Mr. Sessums said she told him. “‘Oh! You are the Oscar Wilde of New York!’,” Mr. Sessums nodded at her. “That is her way of complimenting me and denigrating me at the same time,” he said. “She was really good at that.”

And here is how Sessums, once on the six-figure high hog under Brown, describes what it’s like – at age 58, clean and sober – to be running year-old $12.99 glossy magazine FourTwoNine in San Francisco for website dot429.com:

Sessums’s future in magazine publishing relies on the success of a lean startup, a far cry from the luxurious world he once inhabited. “I look on the start-up culture the way I look on sobriety,” said Mr. Sessums, staring out the window of his small apartment on Telegraph Hill. “It’s one day at a time.”

For Sessums, a low personal and professional point turned out to be a 2009 Daily Beast assignment involving Daniel Radcliffe. All in all, a fantastic feature article from Holson.

P.S. Sessums found his way to the FourTwoNine EIC position via a job ad posted on Mediabistro.