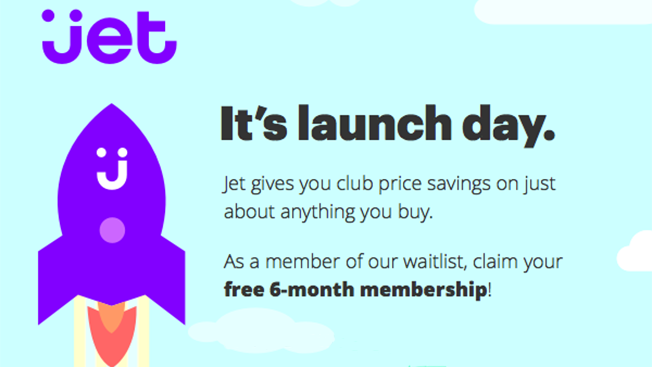 Jet.com went live today with plenty of buzz, but its long-term viability is questionable.

The well-funded e-commerce website offers consumers an alternative to Amazon for seemingly all of their online shopping needs. Industry watchers are fascinated with the new player for two chief reasons. First, there's Jet.com founder Marc Lore, who also launched Quidsi, the parent company of Diapers.com and Soap.com, before selling it for $545 million to Amazon in 2010. The second reason centers on whether or not his business model can survive over the long haul.

Hoboken, N.J.-based Jet.com puts a twist on the Amazon model, routinely filling orders by actually buying products from other websites like JCPenney.com or Walmart.com before shipping them off. What's more, it guarantees the lowest prices on roughly 10 million items. So, it's going to end up constantly purchasing items at a certain cost, then taking a loss by reselling them at lower prices.

How does that loss-leader-heavy math work? While Lore has contended in recent interviews that once he achieves big-time scale, the financials will take care of themselves, others wonder about the strategy.

"I don't think the current business model will be sustainable," said Sucharita Mulpuru-Kodali, a Forrester Research analyst specializing in e-commerce. "They will pivot or find another way to make money. Marc Lore knows that the most important thing is just to stay in business and pay your bills. They'll figure out what they need to do to stay alive."

Ultimately, today's launch could be a ploy to attract countless customers and gather millions of email addresses before Jet.com reveals its true strategy.

"They have certainly invested in marketing themselves—the question will be can they live up to expectations," said Traci Gregorski, vp of marketing at Market Track. "They have a lot of work to do in order to be considered a threat [to Amazon], and the sustainability of this model will depend on their ability to be agile and adapt to what shoppers want."

But Mike Lees, CMO of analytics company WealthEngine, sees things differently. "The model is definitely sustainable, but the key will be whether Jet.com can get a critical mass of consumers to overcome the fixed costs of delivering the model at scale, particularly the costs of delivering exceptional service and a reliable and efficient delivery infrastructure," he said.

SmarterHQ CEO Michael Osborne added, "I think Jet.com is going to open consumers' eyes to alternatives, and competition is good for driving even further innovation."

Interestingly, Lees doesn't believe Jet.com has to take customers away from Amazon in order to succeed.

"I believe there is significant opportunity for a company that can execute on a model that unpacks the different elements of retail pricing and provides choice to the consumer," he said. "A great example of how this can work is the airline industry, where players such as RyanAir and EasyJet and others have unbundled airfare pricing to give consumers transparency and choice."

Meanwhile, it's worth watching whether Jet.com's business model can win out. Most tweets on the subject have been critical. Here is a sampling:

This business model is completely baffling to me. Don't see how it could possibly succeed. http://t.co/UJXY6YDHGX