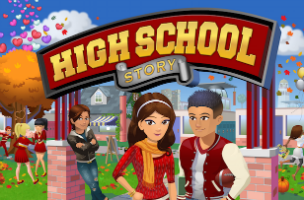 Pixelberry Studios has today announced a new version of its popular high school simulation game High School Story, introducing an SAT-prep feature to players. The new update will tackle the teen stress epidemic by allowing players to easily study word vocabulary within the game. This update follows other cause-specific updates Pixelberry has released, including one focused on cyberbullying and another that highlighted teen eating disorder and body issues.

This update was inspired by the company’s own desire to release an educational product on mobile, and by a 2013 survey from the American Psychological Association that showed 83 percent of surveyed teens identified school as a source of stress in their lives.

Via this update, players are introduced to a new classmate, Kallie, and can learn more about her through story-based quests. Along the way, Kallie will help players learn the meaning of challenging (or unfamiliar) SAT words through quiz-like questions and level-based mini-games.

We had a chance to chat with Pixelberry CEO and co-founder, Oliver Miao, about this update, the company’s previous cause-based gameplay, and what it alls means for the future of the game.

Oliver Miao: One of our company’s visions from the start was to try and focus on really fun games first, and then over time, if we were able to have commercial successes, to start layering in elements of education. So, when we first designed High School Story, we actually intended to do what we’re finally releasing this December. So, it’s taken a while for us to get there; we really wanted to do things right. Along the way, what we’ve done with the partnerships with the cyberbullying side and on the eating disorder side, have been a really good training ground in preparation for what we’re planning to do now in December.

We’ve created a completely new part of the game that players can go into that teaches players vocabulary – both SAT and ACT vocabulary. And we’ve done it in such a way to try and make it really fun for players, to engage and learn. We’re being very cautious to be upfront with players about the fact that they can learn while they play the game. But at the same time, still try and keep it really engaging and fun for them. We think putting education into a successful commercial game like this is something that is pretty risky, but we’re really excited to see how our players react to this, and if – like what we’ve done with cyberbullying – if this is something that they’ll actually appreciate and hopefully over time learn from this feature.

Inside Mobile Apps: Will this be unlocked as part of a quest set, like cyberbullying and the eating issue events were, or is this going to be more like the poll building where everything will be isolated away from quests?

Oliver: It will be more like a building. We actually have a library building, and when players click on that building, there’s a whole new form of currency called Pencils, that they can use to play different mini-games. Once they tap on that building, they actually go to a stream that’s a map with a whole bunch of different nodes on the map. So, very similar to a lot of the match-three games style maps out there. There’s two main types of mini-games. The first is story-driven, and that’s very similar to what we’re doing already with the quests, but at different points in the story, you encounter multiple choice questions. The multiple choice questions [contain] different words and you’re trying to match which word matches the definition of the new word.

We did it in this way so that players can hopefully figure out what the word is by the context of the sentence it’s already in. If they get it wrong, that’s ok too – they can’t leave the question until they get the right answer. This story-making design really teaches players what the word is, in a way that isn’t just like “word and definition.” Because it’s story-driven, for these particular types of mini-games, the story will evolve over time, and players will get to learn more about a new character that we’ve introduced named Kallie.

IMA: Are players going to be rewarded for completing these, just like the poll questions?

Oliver: They will be awarded [items], but in a different way. We’re actually rewarding players with Rings, our premium currency. We think players are going to be excited about the feature both because they’re unlocking new stories and learning more about existing characters and the new character, and then also every time they finish a mini-game, if they do well enough, they earn Rings.

At the end of this first set of mini-games that we’re releasing, when players get to the end (which is 31 nodes), they’ll actually be able to unlock Kallie as a new character.

IMA: What type of character is she? A prep, a nerd?

Oliver: She’s actually a writer. She’s a little bit different than the other characters at first. In terms of when you first encounter – we call them “game maker characters,” so whenever you encounter these new gamer maker characters, like Nishan or Julian, they aren’t enrolled at your school initially. Similarly, Kallie has been homeschooled, but she’s gotten permission to come join you just for English classes.

She is a little more socially awkward, and when she gets nervous, she talks a lot. Her vocabulary is really good, so when she talks a lot, sometimes she’ll throw out vocabulary words, and those are they words that we’re trying to teach players.

IMA: With the Cybersmile [bullying] event, you guys had a t-shirt players could unlock for their closets. Will this event have anything like that – new decorations or clothing items?

Oliver: There won’t be anything like that [here]. We tried to segregate the education feature into its own part of the game. We’re hoping that the majority of our players are going to get really excited about this and enjoy it, but if there are some players who just get turned off by the idea of having education as part of the game, and they just want to focus only on the fun, they can do that. They can keep playing High School Story without being involved with the education part at all. We tried hard to make it so that players get really excited about the education aspects.

IMA: So if players were to decide not to play, aside from the Rings that they wouldn’t receive from playing the mini-games, what else would they be locked out of? Would it just be Kallie, or…?

IMA: Going back to the Cybersmile and eating issue content, you said that this education area is where you guys wanted to go with the game in the first place. Does that mean that you’re going to stop branching out into things like bullying, or are you still going to address these issues that are important to teenagers?

Oliver: We still definitely plan to address those causes. I guess you could look at it as – after we did eating disorders, we moved onto education. It’s been a while since something like this has come out for us, so we’ve actually been working on this feature for about eight months. It’s definitely the largest feature we’ve put into our game. We spent a lot of time on it, and we actually had to hire more writers, because we have more story going along with it. We are definitely thinking about “next topics” to hit; I’m hoping by the springtime, but we’re not sure what topic would be the most helpful to work on next. But we’re actively looking for ideas that are really relevant to teens, and can help them the way we have done with the others.

IMA: That actually goes into my next question. I was wondering if there were any topics that you guys would refuse to cover. Say, something like a rape issue or a suicide issue. I know that the game is supposed to be entertaining, so I don’t know if you’d want to go to a place that’s that dark.

Oliver: I think there’s a point of debate even among our own team: “How dark do we want to go, and how real do we want to be?” When we first tackled cyberbullying, our initial storyline was not as “real” as what we ended up with. It became more real because of the feedback Cybersmile gave us. They wanted there to be more tension and also more risk, because the cases that they’ve seen and they hear from players can be really dark.

One of the things we are considering would be potentially addressing suicide. The reason why we’re debating it internally, is because our game is definitely targeted at teens, but we’re also cognizant that there’s a wide range of players playing our game. So, we want to continue to make it pretty age appropriate for a wide range of players.

IMA: Would it ever be possible then – to not age block, because someone could lie about their age – but in the same way you did previously, put a warning in there that “this content is going to have mature themes” and give players the option as to whether or not they want to experience it?

Oliver: If we did hit that topic, that’s absolutely what we’d need to do. With the eating disorders update, it really surprised both us and the National Eating Disorder Association – the feedback they had given us on the quest was asking us to remove some specifics that we had in there about weight and crash-diets, because they said those could act as trigger points. So what they didn’t realize, and what we didn’t realize and what really surprised us was that the quest as a whole could actually act as a trigger for teens who’ve experienced eating disorders already. So that’s why we rushed, and within 24 hours, we put up a warning screen, based on direct feedback from our players – players who have had eating disorders. As they were playing, they realized that this brought back so many real emotions, and they suggested that we have a warning.

So, definitely, if we tried to address something like suicide, I think we’d want to do that as well. Suicide is actually one that we’ve had players write in and suggest that as one of our next topics. But I think that topic, even more so than eating disorders and cyberbullying, is something that we’d have to be really sensitive about how we address.