Magazine vet in the midst of inspiring recovery from injuries caused by 2013 New Year's Eve fall. 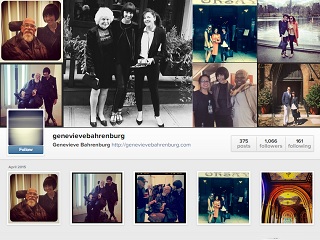 StyleLite managing editor Hannah Ongley recently spoke with Genevieve Bahrenburg, a former staffer at Vogue, Elle and Above magazines. Bahrenburg, whose parents both worked for Rolling Stone, is currently continuing her remarkable recovery from a horrific fall on New Year’s Eve 2013.

As a result of the freak accident in a Bowery apartment complex stairwell, Bahrenburg was in a coma for a month and has had to endure a dozen brain and skull surgeries. Somehow, she has remained positive about life and, in a strange coincidence, is living in the former apartment of a top 1990’s model (Kiara Kabukuru, a.k.a. Alice) who similarly survived a horrific 2000 NYC traffic accident. From the Stylelite interview:

“When we first met, it was funny, because I used to work for Vogue and she [Alice] was on the cover of Vogue, so we had a lot to discuss.”

Bahrenburg is currently involved in charity work and working on two books: one, about her harrowing personal ordeal, and the other, Close to Close, about close friend and artist Chuck Close. She tells Ongley she plans to continue contributing to Vogue.