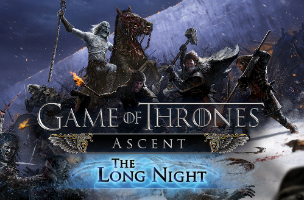 Disruptor Beam has announced the launch of the first expansion for its Game of Thrones Ascent on Facebook and mobile platforms. The expansion is called “The Long Night,” and it sees players traveling beyond The Wall, facing both the Wildlings and the White Walkers in this new area. The expansion offers upgrades to the game’s Alliances system, along with new quests to complete and items to collect.

As part of this event, players can now equip themselves with items from the Night’s Watch (an order that patrols The Wall), or with Wildling fur items. There’s even the chance to pick up “a ghoulish hand” from the undead Wights.

Meanwhile, the game’s Alliance system has been updated with two new systems: the Quartermaster and Tactics. If players are a member of an Alliance, they’ll receive a Quartermaster key each day they login to the game. This key allows them to open a supply box, which may contain Prestige (a new currency) or exclusive (and rare) items that can only be acquired through these chests.

Prestige is spent on activating a player’s tactics, or an Alliance’s tactics. While it’s available in Quartermaster boxes, Prestige can also be earned by completing normal activities within the game, like alliance challenges, adventures, alliance vs alliance actions and defenses, and more. The amount of Prestige these actions award varies, depending on a player’s level and the overall difficulty of the event. Users can earn 2,000 Prestige through in-game actions each day, while Quartermaster Prestige is unlimited. If players happen to hit that 2,000 Prestige cap, they’ll receive another free Quartermaster key to use on a supply box.

Finally, tactics allow Alliances and individual players to choose and activate bonuses for themselves. As you might expect, an Alliance tactic impacts all Alliance members, while a standard member tactic affects only the player. By spending Prestige, players can unlock up to four tactic slots for themselves or for their Alliance (thereby unlocking the ability to have four active tactics at once). Tactics themselves cost Prestige to activate, and may speed up the player’s actions, increase the attack and defense of players or their Alliance, and so on. These tactics are only active for a limited period of time.

It should be noted that when players join an Alliance, they immediately gain any active tactic bonuses associated with that Alliance. However, if they leave the Alliance, they’ll lose all of their active tactics, even those placed only on themselves, as well as any Prestige contributed to the Alliance while a member. In addition, the cost for activating an Alliance-based tactic varies, depending on the number of members in the Alliance itself.

Since launch, over six million people have joined Game of Thrones Ascent, with the overall game allowing users to live the life of a noble in Westeros. The game offers story-driven quests that explore the lore of the original literary works of George R.R. Martin, and allows players to work either with or against each other in the game’s persistent world. Game of Thrones Ascent is available to play for free on Facebook, and is available to download for free on the iTunes App Store and Google Play.