Foursquare has a new ad product that invites users to tweet marketing messages when they check into businesses. The product is called Tap to Tweet and will be available in early April, Adweek learned via a memo obtained from an industry source. The development was later confirmed with Foursquare. 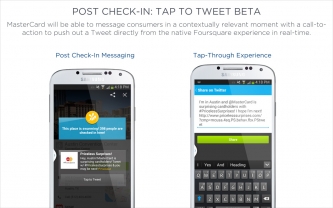 Foursquare tested the new ad format with MasterCard during South by Southwest Interactive earlier this month. Foursquare is looking for more advertisers to join the beta tests, and it is asking for commitments of $100,000, according to an email sent to potential partners.

“Many users have already linked their Twitter and Foursquare accounts, so we are able to create an elegant tweet experience directly within the app,” Foursquare’s email said. “We've worked to create a seamless, native experience through which brands can drive social amplification in a targeted moment based on location.”

Tap to Tweet capitalizes on the desire for marketers to enlist influential social media voices to spread their messages. Foursquare, run by cofounder and CEO Dennis Crowley, says it has 45 million registered users, but its active base is hard to pin down. Twitter, on the other hand, has more than 240 million active users. So Crowley & Co. want to leverage Twitter's API to extend their advertisers' reach, which could make their own ad products more lucrative for brands.

"We're looking for new ways to augment [post-check-in ads] and make that product stronger," Foursquare rep Brendan Lewis told Adweek. "This allows brands to get greater penetration of their ads across other social media properties."

New York-based Foursquare, founded in 2009, was a pioneer in mobile-social media with its popular check-in feature, allowing users to share their whereabouts. The company is still trying to harness its marketing potential, and already serves ads to users as they check-in at businesses.

The platform has evolved to rely less on check-ins and more on location-based recommendations and reviews to keep users engaged. Digital players such as Waze use Foursquare's mapping technology, and its data capabilities have proved helpful in marketing.

With Tap to Tweet, users will be asked to share the post-check-in ads outside the platform. In the case of MasterCard test, Foursquare users were encouraged to send Twitter messages with the hashtag “pricelesssurprises” and links to the campaign’s website, which offered cardholders special offer.

Foursquare’s advertising business is still nascent, and there is pressure for it to accelerate, according to multiple sources familiar with the company. In December, it took on new investors, raising $35 million from DFJ Growth and Capital Group. In February, it announced that Microsoft contributed another $15 million.