For Some Reason, Lululemon Is Launching a Special Edition Beer

And of course, there's a totem pole on the can. Sigh. 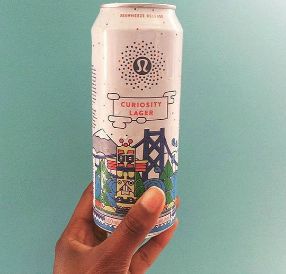 Lululemon is best known for having a leader who can’t talk to the media and taking yoga pants to the streets only to expose the wearer’s ass to the whole block. Now maybe they’ll also be known for beer? Because… yeah?

The brand has created a special edition Curiosity Lager for the SeaWheeze Sunset Festival and Half Marathon. Only 88,000 cans of the lager have been made, in partnership with Stanley Park Brewing. And according to Stanley Park’s marketing director Doug Devlin, the goal is to reach more men.

Most of Lululemon’s customer base are women, so trying to reach out to men to expand that makes sense. The fact that they’re using beer to do so is a little weird. Curiosity Trail Mix? Or Curiosity Protein Shakes? That makes sense, particularly at a half marathon event. But beer is a bit out of their wheelhouse.

Moreover, as some critics point out, beer isn’t just for men. Ladies like a little lager as well. So the company’s tradition of being off the mark with women continues. Perhaps they just need to stick to making the gear and nothing else.

Separately but related, since we’re talking about causing offense, you’ll notice that the can includes a very colorful totem pole. Some others noticed it as well and have taken to the company’s IG account to point out that cultural appropriation isn’t cool.

“Did you even consider collaborating with a local Indigenous artist before you created a caricature of such a sacred and meaningful thing as a totem?” asked one commenter.

Sigh. Of course they didn’t. FWIW, the can just looks like a mish mash of images that came to someone who spent a little too much time taste testing the product, if you catch my drift. But that aside, the overall issue is one of how lacking in deep thought many of the company’s marketing moves seem to be. Who knows how much bigger Lululemon might be if they could get this part of their business strategy sorted.

Cover image via Instagram with the caption: “Meet Curiosity Lager.The official brew of #SeaWheeze, coming soon to a party near you. (can creative by @kdvsmith)”