They say it's holding back the cause of female judges.. No one 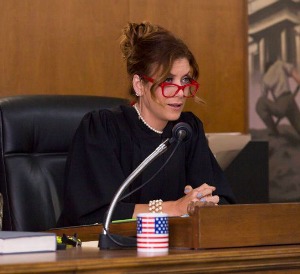 Have you watched the NBC program Bad Judge? Doesn’t look like many people have. Except perhaps the Florida Association for Women Lawyers. The president of the Miami-Dade chapter, Deborah Baker, has sent a strongly-worded letter to the CEO of the network Steve Burke asking him to cancel the show because it’s a step backward for womankind.

“The show depicts a female judge as unethical, lazy, crude, hyper-sexualized, and unfit to hold such an esteemed position of power,” the letter says.

And there’s more: “A misogynist who believes that women in power cannot control their sexuality, their bodies and their professional or personal conduct would have their views endorsed by this show.”

Yikes. But in fairness, this show isn’t trying to be Law & Order.

We’ve included a clip above, one below and a link to Jezebel, which notes that Kate Walsh, the “Bad Judge” of the title, wears underwear as an outfit to court. The show is striving to be a comedy of the most basic variety. So in that sense, the judge, the witnesses, the lawyers, the bailiff… no one involved is coming off too great.

At the same time, we see where the group is coming from. The letter notes that only four Supreme Court justices out of 112 in history have been women and “only 35% of the active judges sitting on the thirteen federal courts of appeal are women.” So the thinking is that women are already at a disadvantage and this sort of show promotes further stereotypes, making it harder for women to break this judicial ceiling.

Ultimately, more than anything, this brings attention to the show and the group, which is a win-win in a way. Unfortunately for the Association, the show has received pretty bad reviews, which means that few people are taking it seriously. That’s key to getting people upset enough to take up your cause. The antics in this show are well beyond anything that anyone — man or woman — would do. I would probably place this more along the lines of an effort at being edgy that’s gone wrong than a biased statement about the shortcomings of any one group.

Either way, there are predictions that the show won’t make it much longer, so there’s a chance it won’t be around to offend too far into the future. But it would be nice to get a good Law & Order-like revamp with a cool lady judge. I’d watch that.