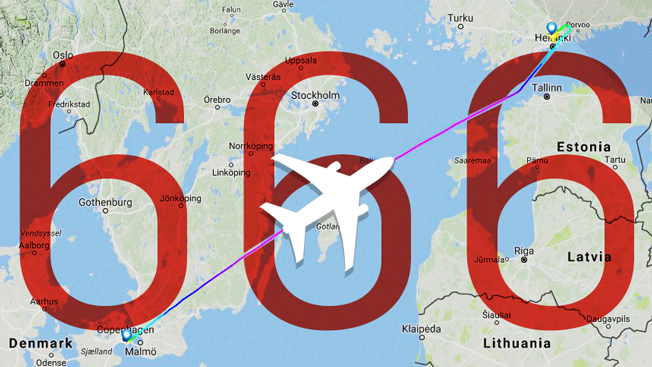 It's early on Friday the 13th, but Flightradar24 has already set the bar high for Twitter marketing when it comes to having a laugh around this day of superstition. The flight tracking website picked up on a scheduled Finnair flight from Copenhagen, Denmark, to Helsinki, Finland, taking off early afternoon local time (or morning here in the U.S.).

Flightradar24's social media marketers—a team of two—struck contextual gold when they noticed the flight's number and destination. "HEL" is the abbreviation for Helsinki Airport.

Would you dare to sit in row 13, on board @Finnair flight 666 en route to HEL on Friday the 13th?https://t.co/lKujhSu0gP pic.twitter.com/fWIvQTMLjF

Then, they got a bit of help from a Twitter user named Chris Limb (@catmachine) in Brighton, England.

As @catmachine just pointed out the aircraft is 13 years old as well! https://t.co/P81dYXuR56

A couple of hours later, the plane landed at its HEL destination between the 13:00 and 14:00 hours, which Flightradar24 had a little more fun with.

✈️️ Finnair flight 666, at 13 o'clock on Friday the 13th with a 13 year old aircraft, has landed safely in HELhttps://t.co/0kWfkcARmO pic.twitter.com/OPvpyyq4F4

Even better, all of the in-jokery put forth by Flightradar24 was essentially true. And it garnered close to 5,000 likes and retweets with the trio of messages.

Flightradar24's team wasn't done yet, trying to add another layer of superstition to the fun thread of tweets.

Can you confirm if flight #AY666 departed from and arrived to gate 13? https://t.co/xJmyBM3JwU

@flightradar24 @CPHAirports Arrival to gate 25. Gate 13 would have been a match made in HEL.