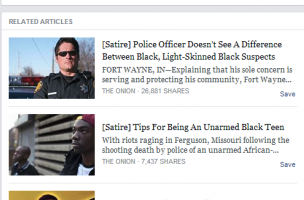 You might have at least one Facebook friend who thinks that Morgan Freeman is really dead, or some satirical Onion headline is the truth. Facebook wants to stop the sharing of satire as fact, as the site is testing a Satire tag on posts from The Onion and other similar sites, according to Ars Technica and sister site AllFacebook.

The tag only appears on the Related Articles module that appears after a user clicks on a link within News Feed.

Facebook confirmed to Ars Technica that this is a test:

We are running a small test which shows the text ‘[Satire]’ in front of links to satirical articles in the related articles unit in News Feed. This is because we received feedback that people wanted a clearer way to distinguish satirical articles from others in these units.

According to Ars Technica, the test has been going on for about a month. Other satirical sites have received these tags, but Facebook didn’t disclose which sites, or if the tag would extend to News Feed posts or other areas of the site later on.

Readers: Do you think this is really necessary on Facebook?