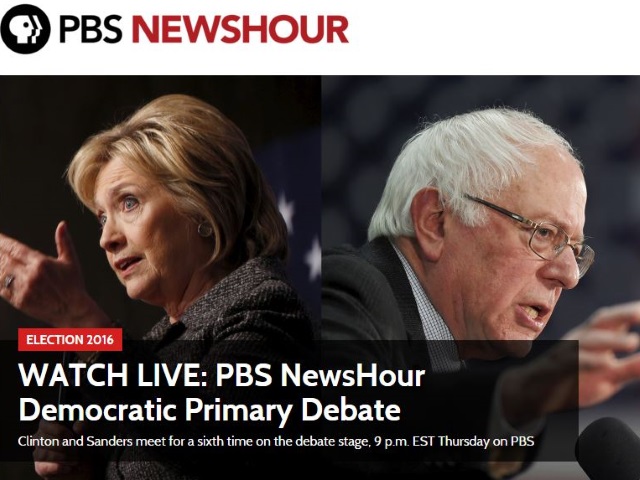 The newscast and the social network created a closed Facebook group made up of undecided voters in states that are set to host primaries in the coming weeks, giving those voters a destination for open discussion and generating some questions for the candidates during the event.

Members of the PBS NewsHour political team also participated in the group, including political director Lisa Desjardins, online political editor Daniel Bush and correspondent and NewsHour Weekend anchor Hari Sreenivasan, who spoke with SocialTimes about the group, which was made available for the public to follow along with five minutes prior to the start of the debate.

Sreenivasan said he posted a video pitch seeking Facebook users who were undecided on which candidates they planned to support, paying attention to the campaigns and debates and not affiliated with specific campaigns.

Users who applied were sent questionnaires to fill out, and several were interviewed via phone or Skype before being admitted to the group. Sreenivasan said the group was “a place where people can disagree agreeably,” and that rather than having people tout their preferred candidates, the group provided a forum where “we are seeing the decision-making process happen out loud and slowly.” He added:

The bulk of Americans, if you sat them down at a picnic table with families who were voting for the other candidate, would probably agree on a lot.

Members of the group were also encouraged to keep Facebook open while watching Thursday night’s debate and suggest potential follow-up questions based on points made during the event.

He told SocialTimes Facebook was an ideal forum for PBS NewsHour “thanks to its massive adoption rate,” and said of Thursday night’s event, “This isn’t a search-engine-optimized debate.”

When asked about potential future plans for Facebook, Sreenivasan said he was curious to see what users on the Republican side of things would do once the candidates they intended to support drop out of the race, and he added:

After today, is there a way we can capture the arc of the decision making?

Live Facebook data was also incorporated into conversation and graphics during the live broadcast of the debate on PBS NewsHour.

The candidates faced off at the Helen Bader Concert Hall in the Helene Zelazo Center for the Performing Arts on the main campus of the University of Wisconsin-Milwaukee, and the debate aired on PBS stations nationwide, as well as via live-stream on the PBS NewsHour site. It was moderated by PBS NewsHour co-anchors and managing editors Gwen Ifill and Judy Woodruff.

PBS NewsHour executive producer and WETA senior vice president Sara Just said in a release detailing the partnership between the newscast and Facebook:

Facebook is such an important place where many Americans turn for political news and information and share it with their friends. We are excited to partner with Facebook at this moment and have the opportunity to incorporate new ways to harness those real-time social media conversations into the debate experience as Americans are making decisions about who they want to lead the country.

From the start with PBS NewsHour, they brought a spirit of innovation to thinking about how to incorporate people on Facebook into the debate. That spirit shows through in their unique use of Facebook groups to help foster conversation about the issues and bring Americans’ voices into the political process in a new way.

Readers: Did you watch Thursday night’s debate and, if so, did you interact on Facebook during the event?