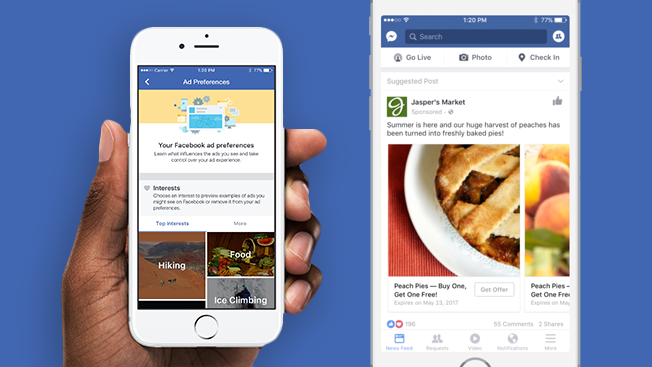 Facebook thinks it has the antidote for ad blocking.

Today, the social media giant and advertising darling is introducing a tool that could help users have more control over the ads they see, which Facebook says could help users view online ads as something to be appreciated rather than blocked.

To do this, the company is giving users more controls over the ads they see in their news feed. The tool, which debuts today, lets users add and remove interests from an "ad preferences" section based on their what they like and don't like. According to Andrew Bosworth, Facebook vp of ads and business platform, the updates are meant to help people better hide from data-driven marketing.

"When they're relevant and well-made, ads can be useful, by helping us find new products and services and introducing us to new experiences—like an ad that shows you your favorite band is coming to town or an amazing airline deal to a tropical vacation," Bosworth wrote in a blog post. "But because ads don't always work this way, many people have started avoiding certain websites or apps, or using ad blocking software, to stop seeing bad ads. These have been the best options to date."

Facebook commissioned research firm Ipsos MORI to better understand what drives people to use ad blockers in the first place. After surveying more than 2,000 people across six countries—the U.S., the UK, France, Germany, Brazil and India—Ipsos found that the majority of people (69 percent) said the main contributing factor to using ad blockers is disruptive ads.


Personalization does seems like it could help. The Ipsos study found that 79 percent felt they should be able to opt out of specific types of ads. That could mean good news for marketers who would rather spend to reach consumers who actually want to read about them rather than wasting money on those who don't.

In a statement accompanying the news, IAB President and CEO Randall Rothenberg praised the move as "spot-on." He said the approach to "respect advertising as an essential ingredient in connecting users worldwide" should be adopted by others across the Internet.

"For hundreds of years, advertising and marketing have been central to the delivery of entertainment and services that are otherwise free to consumers," Rothenberg wrote. "In addition, advertising is essential to the functioning of democratic capitalism; it is how consumers and citizens learn about better prices, better features, better job opportunities and even better political candidates. Facebook should be applauded for its leadership on preserving a vibrant value exchange with its users."

As Facebook offers more tools for personalized ads, it's also expanding where users see them. Now, users that have ad blockers on their devices will begin seeing desktop ads on Facebook. That doesn't mean it's letting up on mobile. Earlier this year, it began making its Facebook Audience Network available outside of native apps, allowing publishers and advertisers to use Facebook's targeting across the mobile web.