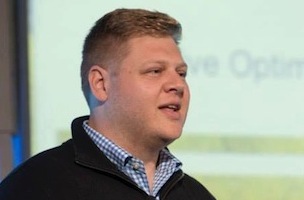 Social advertising is a rapidly changing enterprise. As the pendulum swings from data to creative (and back), Boost Media balances both to handle the creative for Facebook and other social ads for major companies such as Zynga, Geico, Home Shopping Network and Microsoft.

Erik Ford: Advertisers are becoming a lot more comfortable with the Facebook ad platform. I think that’s because of a couple main reasons. One, the advancement, maturity and the robustness of the platform. You’ve got the right integrations with (Facebook) Exchange going on now. You’ve got the right API calls available to give advertisers the data that they need and that they’re looking for. Just from the metrics that they need and the support they need, to target the right audience and measure it — they’re there.

Two, I think Facebook, since it’s still somewhat infant compared to the other networks, is very appealing to advertisers. They like the pricing, from an acquisition cost perspective, and they also like the uniqueness of the complementary data to pull things together. The guys that know how to use Facebook are starting to use Facebook’s ad platform the right way and they’re getting a lot out of it. The smartest advertisers are realizing that you can’t treat Facebook the same as you want to treat other networks or platforms. If you expect to just get direct response out of Facebook, then it’s going to fail every single time. But if you set up your goals in a way that essentially focus on brand, focus on extracting learnings that can be used in brand campaigns, direct response campaigns, other social channels, it’s a gold mine for customer intelligence.

Having that data allows advertisers to paint that path to purchase very well and understand how Facebook plays into the path to purchase. If you look at a lot of marketing studies today, everything posts to social recognition and referrals from friends and family. Facebook is the epicenter of that.

IF: What are some mistakes you still see from advertisers who are still stuck in the old mindset and unwilling to accept Facebook for what it is?

EF: I think it goes back to not treating it as its own. Marketers are very habitual people. It’s really funny because if you look at marketing overall, it’s a very dynamic and evolving landscape. It’s constantly changing. They need to respond to that and understand that. Just taking campaigns from another channel like a Google or a Yahoo or Bing, and take the same techniques or pour over the same creatives, is not going to work. So that’s step one. Overarching campaigns? Yes. But think about how the channel can work for you.

The second thing is Facebook is similar to display in the respect that creative fatigue does set in. What we see time and time again is that advertisers are just not spending the time to refresh their creatives. Facebook is trying to call attention to that and disable your ads when they start to really drop in performance because they’ve seen it leave a bad taste in advertisers’ mouths and they want to prevent that. Don’t treat it the same way you have in the past and make sure that creative is fresh because you have a wealth of new audiences and interests that you can target against. If you take advantage of that and keep images fresh, your campaigns will go far.

IF: Can you tell me some ways that you’ve seen advertisers keep their creatives fresh on Facebook?

EF: There’s understanding, contextually, the environment. There are things like seasonality, there are trends that are going on, that you need to be playing on. Why isn’t a major brand like Coca-Cola piggybacking off Ellen Degeneres’ Oscar selfie shot that got retweeted over 3.3 million times? It’s a huge opportunity. It’s the same thing from a seasonality standpoint. I bought a new blender this week. As I finally replaced my old faithful Braun blender, I had a lot of messaging tied to New Year’s resolutions even though it’s March. If you’re gonna be seasonal, at least do something like, “Summer’s coming up and get ready for that beach body with a new blender.” So seasonality is really important.

You’d be surprised to see how people don’t have any kind of testing process or methodology. It doesn’t have to be complex. We actually posted an article recently that said, “Let’s challenge the conventional norms of A/B testing,” because there’s so much opportunity in throwing up a bunch of different things and seeing what works. The data will respond. You’ll see very quickly. You can pause the creative that isn’t working and run with the creative concepts that do work.

Overall, I think that leads into the third point — subjectivity. A lot of people think at agencies or in-house organizations on the brand side that they’re creative experts. I’m sure they are and I’m sure they have very great backgrounds, but the reception that we’re seeing — especially on Facebook — is that many different things work. You have so many different audiences. For example, for Clash of Clans, having the main characters of Clash of Clans in a very well-designed ad unit vs. something that actually looks like a kid took a Clash of Clans map and put it into Microsoft Paint and put in arrows and strategy can tend to out-perform that well-designed Clash of Clans unit. Don’t be afraid to try different things because you can be very surprised with the results you get.

IF: How have you seen advertisers adopting video, because I know it’s been something that Facebook has tried to push?

EF: I think Facebook’s smart and they’ve been ahead of the curve on that. … There’s no question that 2014, going into 2015, is going to be focused on video. There’s a production lifecycle to it and there’s higher costs associated with it. The brightest advertisers are becoming a little smarter about it. They’re making use of platforms like Instagram’s video capabilities or Vine to do more short brand video snippets that don’t require full-on production crews. It’s amazing because that parlays very nicely into this whole native explosion where it feels a little more genuine, with content being user-generated than it does with some sort of brand or marketing message. If Facebook continues to encourage this kind of native production for their ad units for advertisers, I think we’ll see some great traction there.

IF: What kind of role do you see Custom Audiences for websites playing this role? Will more advertisers flock to it?

EF: Custom Audiences is huge. For those who are actually using Custom Audiences, they’re able to map their own database or CRMs against their own databases on Facebook and unlock more than they’ve unlocked before. … Facebook is removing a lot of extra layers or extra steps — both cost-wise and friction-wise to achieve the same results that you see in the display ecosystem. … By the time advertisers can actually get advertisements to eyeballs, there’s at least 30 percent taken right off the bat. Facebook is basically helping eliminate that toll, which advertisers should be cognizant of because they can use that comparatively against other buys that they’re doing. While they’re reducing that cost, they’re also elevating the sophistication in terms of targeting capabilities and getting data back against your CRM to create more intelligent campaigns, more intelligent interactions and more intelligent ways to store that data and use it for understanding the lifetime value of their customers. There’s a huge opportunity there for advertisers to use the data in bigger ways than just advertising.