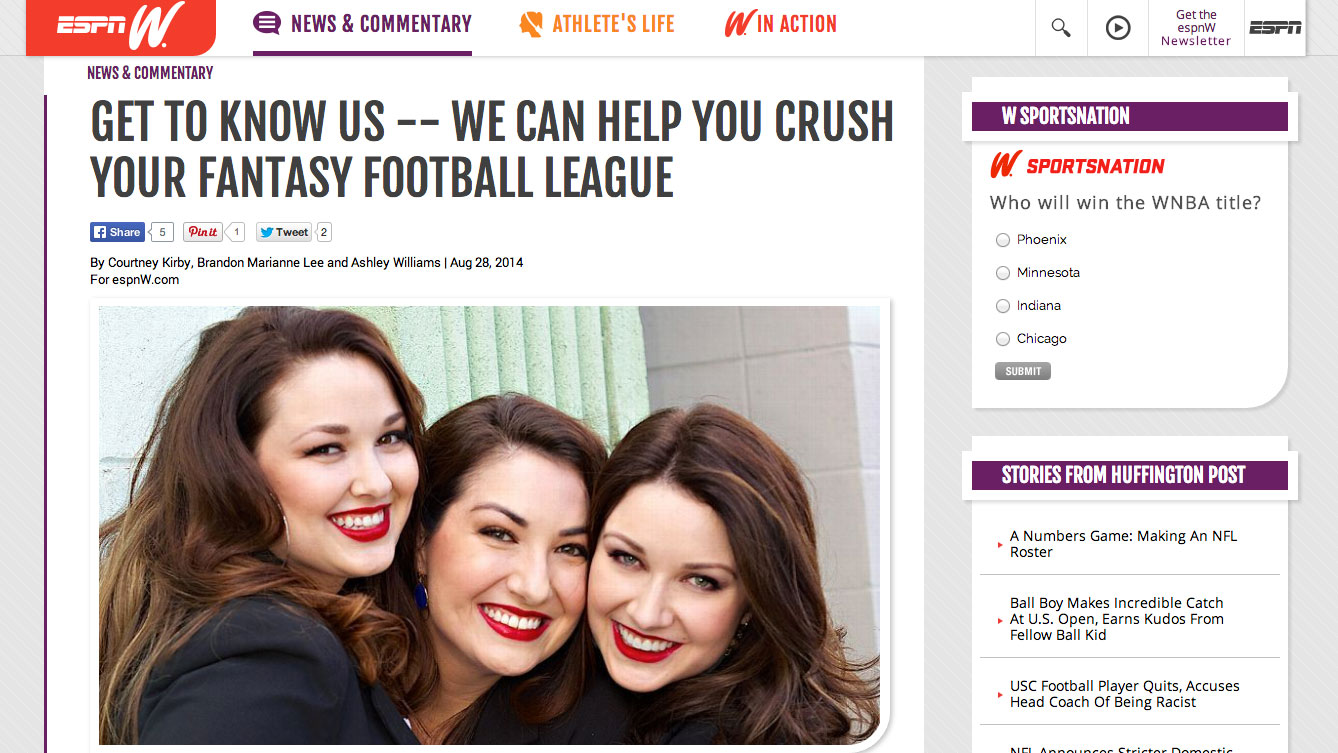 ESPN thinks Fantasy Football is too complicated for the female brain to understand, so it's simplifying the stats into terms women will comprehend by posting "relationship-based rankings."

An article on ESPNW—the sports publisher's women-friendly portal—introduced the Sisters Williams, who will be writing fantasy advice on its site during this season. The trio of siblings run the Her Fantasy Football podcast, which documents their league and provides analysis for "levelheaded people who love Fantasy Football but don't want it as their second job." Apparently because women can't grasp the concepts posted on the thousands of existing Fantasy Football sites, the Sisters Williams will dispense their advice in female-friendly terms that parallel the game to dating.

"That's why we have a simple relationship-based rating system that cuts through all of the clutter," the sisters wrote. "LeSean McCoy and Calvin Johnson are two of the very best players in the game, so we consider them 'Marriage Material' (elite players). Arian Foster and Andre Johnson? 'Boyfriend Potential' (terrific catches). Wes Welker and Vernon Davis—'It's Complicated' (pretty good placeholders until you find something better). And so on."

It's especially degrading considering that ESPN's main Fantasy Football site has a series of introductory videos to help people learn the game, but has employed the talents of one of its top Fantasy Football analysts, Matthew Berry. While he can create a Fantasy Football-for-dummies primer for the main audience, it seems ESPN believes that neither he nor any of its staff know how to speak to women, who apparently only comprehend things when it relates to finding a potential mate.

Football doesn't need that much help getting women's attention. Currently, 46 percent of all NFL fans are women—and 63 percent of women 12 and older say they love the game. While according to the Fantasy Sports Trade Association only 20 percent of Fantasy Football players are women, that number is increasing rapidly. Even the NFL gets that women want football apparel, and they want the same offerings men get, just in more appropriate sizes. They also realize that the majority of women want color options other than pink.

And, let's not kid ourselves here. While there are elements of football that turn it into a human chess match, it boils down to a game where people try to move a ball from one side of the field to the other without being tackled. And, Fantasy Football's basic premises—players that move the football further and get more touchdowns score more points for your team—are equally not complicated. If someone can score a 6 on the Wonderlic Test and be one of the top running backs in the game last season, then the sport isn't rocket science.