Emilie Le Beau Lucchesi is the fourth member of her family to earn a doctorate from the University of Illinois at Chicago. 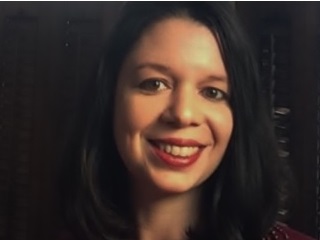 On Nov. 11, University of Illinois at Chicago student Emilie Le Beau Lucchesi snagged her first New York Times byline. For an essay that examined the question “Is Fat Stigma Making Us Miserable?:”

Dr. Courtney Bailey, a media scholar in popular culture and an associate professor at Allegheny College in Pennsylvania, says that fat stigma intensified after 9/11, when Americans’ sense of vulnerability translated into increased animosity toward the fat body. “Think about what fat bodies signify culturally,” she said. “Moral weakness, incompetence, the list goes on. Those are also things that threaten national security.”

On Dec. 11., Lucchesi will have two much bigger reasons to celebrate. On that day, she will receive her Ph.D. in communication while her husband Michael will separately accept his MBA (!) from the University of Chicago. Per a UIC News write-up, Lucchesi is the fourth member of her family to earn a doctorate from the school:

Her grandfather, Leon Le Beau, received his master’s and doctorate degrees in microbiology. He spent his career at UIC as a faculty member in pathology, microbiology and bio-medical visualization. He was awarded emeritus status in 1985, then served as associate dean of international programs from 1988 until his retirement in 1992. He died in 2004…

Her aunt, Michelle Le Beau, earned a Ph.D. in pathology and genetics from UIC in 1981. She is professor of medicine and director of the University of Chicago Comprehensive Cancer Center.

Lucchesi’s Bachelor’s in journalism is from the University of Missouri and her Master’s in communication was earned at DePaul. She plans to pursue long-form journalism and already has a publisher lined up for her non-fiction book Ugly Prey: The Untold Story of an Innocent Woman, Obsessed Lawmen, and a Murder Conviction that Scandalized a City.

As Lucchesi notes on her personal website, less than 700 students graduate each year with a Ph.D. in communication. She has been contributing articles to major daily newspapers for several decades, writing most often for the Chicago Tribune, and has taught various communication and media courses at DePaul since 2009.

At next week’s graduation ceremony, Lucchesi will wear the black robe that her grandfather wore at his 1952 graduation.