Embeds Co-Creator Scott Conroy: ‘Media Needs to Get Out of the Washington Bubble’ 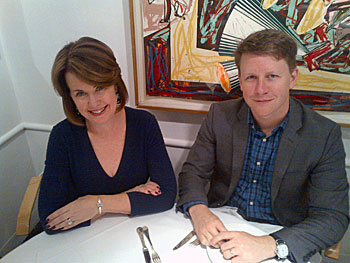 Talk about timely! I couldn’t wait to dish with this week’s Lunch date now that we’re living in the age of  “alternative facts.” I was joined today by “recovering journalist” Scott Conroy, co-creator and executive producer of the new digital series Embeds, now streaming on go90.com and available on the free go90 app.

The series was inspired by Scott and Peter Hamby’s lives as embed reporters for CBS and CNN on both Sarah Palin and Mitt Romney’s presidential campaigns in 2008. “When I was covering Sarah Palin, I thought we’d seen the most insane [presidential] election we’ll ever have,” Scott told me. “Boy, was I wrong.”

Scott is also the co-author of the bestseller Sarah From Alaska. His next book, Vote First Or Die—a book that weaves his personal narrative as a reporter with interesting anecdotes about the New Hampshire presidential primary through the years will be published in April by PublicAffairs.

In light of the barrage of nonstop news of President Donald Trump’s continuous and escalating feud with the press, I was eager to get Scott’s insider take on things. “Sarah Palin is the Rosetta Stone for all of this,” he began. “I don’t think a lot of people know that Steve Bannon was her consigliere. He latched on to her.” Scott first met Bannon in 2011 when he was the mastermind behind her exploratory campaign for a possible presidential campaign run. When Palin decided not to make a run for the White House in 2012 Scott was “surprised” but, he said, “Bannon regrouped and found his guy — Trump.”

Bannon, said Scott, was smart enough to recognize the Tea Party rhetoric about crony capitalism and ‘draining the swamp’ that resonated with Palin supporters had struck a nerve among a certain segment of voters that weren’t going away. “People used to thinks of Republicans as the wealthy country club set, but Bannon basically crafted a new identity for a disaffected working class, a voting block that was big enough to carry Trump to the White House. Bannon realized this and executed his campaign strategy for Trump brilliantly. He’s an ideologue to a degree, but more than anything he’s an operator. He knows exactly what buttons to push to fire up the base.”

And one of those well-worn buttons is selling voters on the idea that the media is the enemy. “Palin did that with the ‘lame stream media,’ but Trump took it to a whole new level,” said Scott between bites of Cobb salad. Trump’s tendency to point out individual reporters like Katy Tur to the crowds attending his rallies was clear evidence that he has “no shame” in his dealings with the media. “I heard him tell supporters at a rally in Fort Worth he’d like to change the libel laws to make it easier to sue journalists. The crowd loved it.”

We both agreed that the bitter irony is that a largely acquiescent media and its 24/7 coverage played a huge role in Trump’s ascendancy to the presidency. “I think the coverage is getting better,” said Scott. “In the last few weeks it’s gotten more aggressive, but it’s too little, too late.” Yup.

In today’s reality-show nation, “There is a direct line from The Apprentice in 2004 to Jeff Zucker to Sarah Palin and Steve Bannon to Trump,” said Scott. With the presidential playbook of yesteryear out the window, it’s not just journalists and citizens that are trying to figure out what the “most unpredictable president in history” is going to do at any given time. “I can just imagine the Chinese ambassador preparing for his first sit-down with Trump being told, ‘The first thing to do is to praise The Apprentice,” said Scott.

With Trump threatening to ‘hand-pick’ which outlets he’ll talk to or let into the White House, the media needs to thrown down the gauntlet, warned Scott. “They need to get away from ‘access journalism’ because access journalism in the Trump era is a fool’s errand.”