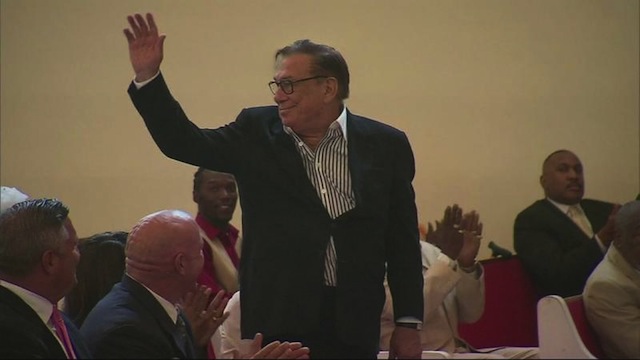 The latest version of Donald Sterling‘s attempt to extend his period of infamy to twenty full minutes might strike the average reader as a bit misguided: the soon-to-be-former Clippers owner showed up at the predominately Black Zion Baptist church in downtown Los Angeles yesterday armed with a full film crew and a couple of bodyguards who resembled slightly less intimidating versions of The Mountain.

Those dudes weren’t there to break skulls, though. They simply wanted to help their boss enjoy the “warm welcome” he received from the congregation at the “beautiful” service.

Your short, painfully awkward video after the jump.

Of course, both parties may have had ulterior motives. Sterling wanted to convince the world that he can sit in the presence of someone who doesn’t look like him for an hour without being offensive, and Zion pastor J. Benjamin Hardwick–who met the man a couple of weeks ago through sheer coincidence and learned enough to let the world know that he’s not a racist–just wanted a tiny bit of the public’s waning attention.

We cover this event primarily because it will inspire many readers will grumble about “PR stunts”, and we thought we’d take the opportunity to remind everyone that Mr. Sterling had no official counsel as of last month’s Anderson Cooper interview. If he has hired a firm since then, they’re not exactly transparent–and for good reason.

Idiots are still making headlines and “Game of Thrones” gave us a punch in the gut after a week off. All’s right with the world.