After New York and London runs, Here Lies Love is slated for Sydney later this year. 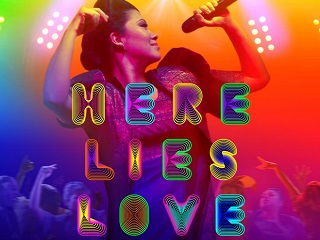 Sydney-based arts writer Steve Dow starts off his David Byrne interview piece in The Saturday Paper with majesty and erudition:

Ritual fascinates and inspires David Byrne. Reading Polish journalist Ryszard Kapuściński’s The Emperor, a 1978 account of Haile Selassie’s iron rule in impoverished Ethiopia, he found its descriptions of servitude beautiful. They reminded him of non-naturalistic, avant-garde contemporary performance or East Asian theater, and his own ritualized gestures in pop performance.

It was another, subsequent newspaper article that put Byrne on the trail of Imelda Marcos, who he discovered was not only once a Studio 54 regular but also pals with Andy Warhol. The resulting concept album and musical, Here Lies Love, were done with Fatboy Slim; a run of the show recently ended at New York’s Public Theater and Byrne is now Down Under casting a forthcoming Australian production.

Byrne tells Dow that as far as he knows, Marcos has not seen the musical (it was also staged in London). But a Philippines-born cast member gave the former First Lady a copy of the album, and a Filipino journalist separately played her some of the tracks.

Here Lies Love, which is titled after Imelda’s hoped-for and preferred epitaph, is but one of several esoteric directions recently explored by the now 62-year-old Byrne. Last year, he kicked off the Greek Theatre concert season in Los Angeles with a tribute to one-time Nigerian musical star William Onyeabor.