Communities Around the World Fundraising For Nepal Earthquake Relief

And individuals with an international network, like fashion designer Prabal Gurung, are joing the effort. 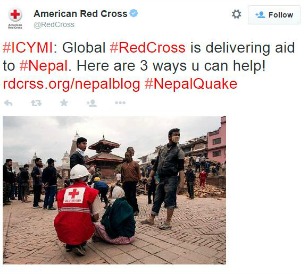 With the death toll now rising above 5,000, the need for relief aid is great in Nepal, where a 7.8 magnitude earthquake struck on Saturday. Reports say an additional 9,200 were injured and another eight million have been impacted. Not to mention the property damage, which is also taking a toll on a number of historically significant buildings.

Communities around the US, and around the world, are jumping in to organize fundraising efforts to help with the response. A quick search of “Nepal earthquake funderraiser” returns with tons of stories about people pulling together for initiatives both big and small, something to do their part.

Even if you’re not participating in an organized fundraiser, there are chances to give on Facebook, and of course through the Red Cross, UNICEF and AmeriCares.

Certainly, the most personal response has come from Nepalese people around the world. CNN has a great story about 28-year-old Lokesh Todi who moved back to Kathmandu after getting an MBA at Yale and, along with his 22-year-old cousin Aditya, have raised over $70,000 for local organizations that, Todi says, don’t have the broad international reach that he has.

And world famous fashion designer Prabal Gurung (born in Singapore, raised in Kathmandu) has used his worldwide connections to raise more than $400,000 for the Shikshya Foundation Nepal using Crowdrise. They’ve set a $500,000 goal.

“That’s where I grew up, where my family is. I’m so deeply rooted. That’s where I identify,” he told The Wall Street Journal. A designer who has worked with tons of famous clients, including the First Lady, he talks of feeling helpless but also pleased that the world is coming together to help the people of Nepal. He has made news appearances, for instance on MSNBC, to talk about the effort. And a number of famous friends (like actress Elizabeth Banks) have donated.

In times like these, a large network activated by a worthy cause can do a lot of good.