Culled from the days when New Yorkers just had to have their newspaper comic strips. 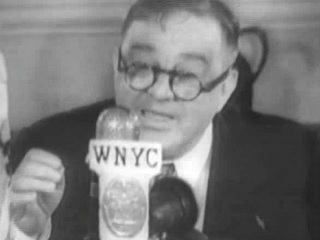 For more than four decades, the Dick Tracy comic strip graced the front page of the New York Daily News. It is still carried in the paper today.

Back in the summer of 1945, a strike by the 1700-member Newspaper and Mail Deliverers Union took out the distribution of all NYC metropolitan daily newspapers except Ralph Ingersoll’s largely forgotten PM. For residents, the only way to get the Daily News and the other affected papers was to line up at a print production plant.

Enter Mayor Fiorello LaGuardia (pictured, above). Not only did the mayor order radio station WNYC to read the daily comic strips over the air for the length of the 17-day work stoppage. But he himself, on Sunday, July 8, jumped into the broadcast stop-gap fray, offering a one-of-a-kind relay of that day’s Dick Tracy adventures. Complete with full descriptions of each panel’s visuals.

We’re reminding you all all this because tomorrow, on Chicago public television, a new documentary about the life of Dick Tracy creator Chester Gould will debut. Chester Gould: An American Original is the result of eight years work by Tom Firak and sons Steve and John, residents of the Illinois town of Woodstock that Gould for many years called home.

From a recent report in the Kane County Chronicle:

The documentary tells of Gould’s move to Chicago in 1921 with a portfolio and $50 in his pocket.

For 10 years, he sent strip suggestions to the Chicago Tribune. All were rejected until Dick Tracy, originally called Plain Clothes Tracy. Gould received a note back saying, “Your Plain Clothes Tracy has possibilities,” the comic strip creator recalled in an interview taped before his [1985] death and featured in the documentary.

“I broke out in a cold sweat. I got the chills,” he said at the time. “I just went all to pieces.”

In honor of the documentary debut, Woodstock has declared February 22 “Chester Gould Day.” It’s the same day as the Oscars, where Warren Beatty’s 1990 movie based on the strip once claimed three statuettes.

The source material for Mayor LaGuardia’s Sunday fireside comic strip chat, shared just a month before a pair of atomic bomb drops would bring World War II to an end, encompassed 13 panels. (LaGuardia ended his 14-year mayoral run at the end of 1945.) To watch video of LaGuardia’s WNYC broadcast, click the Universal newsreel link at the bottom of this page and start at the three-minute mark.

Today, Dick Tracy is drawn and scripted by, respectively, Joe Staton and Mike Curtis, who took over in the spring of 2011 from Dick Locher.