The real meaning of fist bumps and smiley faces 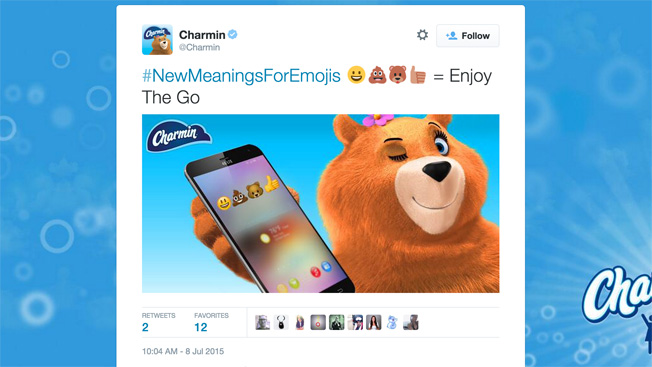 Brands have hit peak emoji mania. This morning, the hashtag #NewMeaningsforEmojis started trending nationally on Twitter, and brands were quick to weigh in with their takes on the small digital icons.

Charmin is well-known for its social potty humor, so it's no surprise that its social team posted an image mashing up poo, a bear and a smiley face to sum up its take on emojis.

Meanwhile, GE and 3M both showed their love of technology and science. GE took the literal meaning of the hashtag a step further by linking to its periodic table of science experiments that is explained by emojis.

= the evolution of technology. We #science. #NewMeaningsForEmojis

Pizza brands were also quick to chime in about how slices of tomato pie fit in with emoji culture.

= Why would you order pizza and not invite me?! #NewMeaningsForEmojis

Here's how a handful of other brands broke down the hidden meanings behind emojis. See which of these you think are funny, and which are lame:

Yay! Naps! You haven't pet me in like 5 mins 3am. Playtime. OMG FOOD BOWL EMPTY I'm glad you rescued me #newmeaningsforemojis

= All those feelings you have for Perrier. #NewMeaningsForEmojis

= I'll have a Steakburger, please! #newmeaningsforemojis