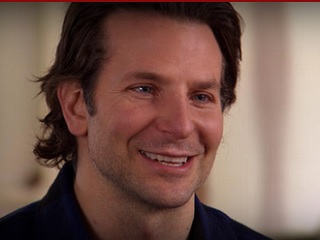 A number of people have made note of Bradley Cooper’s impressive double appearance last night on 60 Minutes and SNL: 40, during which he locked lips with Betty White in The Californians live sketch. But we were struck by another All-Star throughline encompassing those two programs.

A pair of Hollywood titans who separately hit the Studio 8H stage last night to introduce clip segments – Jack Nicholson and Robert De Niro – were also clear and present in the Steve Kroft interview piece. During the intro, Kroft noted that Cooper’s three consecutive Oscar nominations put him in the company of a rare group of ten other actors, including Nicholson. And later on in the report, when Kroft talked about how Cooper borrowed $70,000 to pursue an MFA at The New School, he showed a clip of student Cooper asking Inside the Actors Studio visitor De Niro a question. (Cooper recently recalled that experience on The Jonathan Ross Show.)

Then there’s the weight gain regimen Cooper adopted for American Sniper, as highlighted by Kroft. All those years after asking De Niro a question, Cooper for three months ate 6,000 calories a day and worked out eight hours daily as well to add 40 pounds of muscle for the role of Chris Kyle. Much like the way De Niro famously gained 60 pounds to portray Jake LaMotta in Raging Bull.

All that’s left for Cooper in this department – if, as predicted by mom at the end of the 60 Minutes report, he wins the Best Actor Oscar next Sunday – is to deliver an acceptance speech as memorable as the one Nicholson put together in 1975 upon earning a BAFTA Best Actor prize for Chinatown and The Last Detail. In that first year of SNL, via satellite from the set of One Flew Over the Cukoo’s Nest, Nicholson added a resplendent page to the Gold Linings Playbook.