Bill Kristol Gets a New Podcast

It'll be out every Friday. 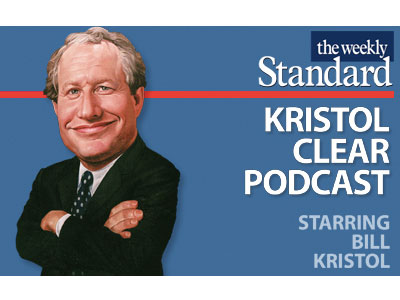 Beginning today, Weekly Standard editor Bill Kristol hosts a weekly Friday podcast on the PodcastOne network. Called the Kristol Clear Podcast, it will feature Kristol, along with Media DC creative director Michael Graham, discussing the week that was in political news and trying to get ahead of the week that will be.

Graham, who joined the Weekly Standard parent company Media DC in May after almost two decades in radio, could be thought of as the foil in this pairing. “My job is to set the table for Bill Kristol,” he tells FishbowlDC. “He’s got the opinions and insights listeners want to hear. After literally hundreds of radio interviews, I hope I’ve learned how to keep the conversation moving, stopping to turn over conversational gems so everyone can enjoy them.”

The podcast is a short one, lasting about 20 minutes. It’s the third Media DC has launched on PodcastOne since the two organizations announced a partnership back in May.

The first episode will be out this afternoon. You can check it out here.